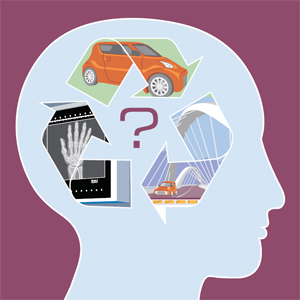 Throughout history, engineering achievements were accomplished in response to specific human needs. Illustration by Jeff Harper.

Five years ago, the National Academy of Engineering came up with a list of the greatest engineering accomplishments of the 20th century. Looking at the list today, it’s hard to imagine life without things like electricity, automobiles, satellites or even Internet- equipped cell phones. Still, there will always be plenty of challenges for engineers to tackle. The collapse of the Interstate 35W bridge in Minnesota last summer brought the nation’s aging infrastructure under public scrutiny. By autumn, an unprecedented drought in Atlanta had experts speculating that citizens would run out of drinking water in a matter of weeks. Just before the new year, the Energy Information Administration released its forecast for 2008, projecting that gasoline and diesel prices would peak at more than $3.40 per gallon this spring.

Missouri S&T alumnus Farouk El-Baz, MS GGph’61, PhD GGph’64, is one man who is uniquely qualified to study challenges. Decades ago, El-Baz helped NASA identify the Sea of Tranquility as a good place to land on the moon. Later, he applied some of the same computer techniques used to survey the moon and count sand dunes in the Earth’s deserts to determine the actual size of the “Million Man March” in Washington, D.C. Last April, El-Baz and his staff at Boston University’s Center for Remote Sensing announced they had discovered an ancient lake in Darfur – using satellite imagery.

So, when the National Academy of Engineering decided to identify the top engineering challenges for the next 100 years, El-Baz was one of 18 academy members selected to look at the big picture. Funded by a $500,000 grant from the National Science Foundation, the committee sought input from the engineering community and the general public.

The Grand Challenges for Engineering represents an array of topics, including energy and the environment – two broad areas that Chancellor John F. Carney III outlined as primary research focuses for the campus during a recent State of the University address. Missouri S&T Magazine spoke with El-Baz in late December about his work.

El-Baz emphasizes that scientists and engineers, in addition to trying to make life in the 22nd century more convenient in general, should be paying close attention to environmental and humanitarian concerns. “In addressing future engineering challenges, it is best to consider first and foremost the needs of humanity,” El-Baz says. “Throughout history, engineering achievements were accomplished in response to specific human needs.”

Inspired by El-Baz’s vision, this issue of our magazine is dedicated to showing you how some Missouri S&T researchers are seeing – and rethinking – challenges of the future. Among the things these researchers are envisioning are new ways to renew vehicles, rebuild high-tech bridges and re-grow bones.