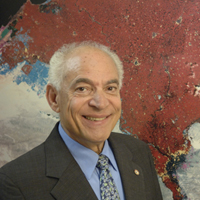 Farouk El-Baz, MS GGph’61, PhD GGph’64, used remote sensing technology to help NASA officials determine where the Eagle would land in 1969. The producers of Star Trek: The Next Generation were so impressed by his work that they named a spacecraft, The El-Baz, after him.

As director of the Center for Remote Sensing at Boston University and a member of the National Academy of Engineering, El-Baz continues to be a man on a number of missions.

He directs multiple efforts to learn more about the world by looking at it remotely through the use of space probes, satellites and other types of sensing technology. One of El-Baz’s ongoing passions has been studying deserts to find hidden sources of water. Currently, he’s working on a plan that would make water more accessible in war-torn Darfur by identifying the best places to dig wells. El-Baz recently took time to answer some of our questions about his work.

How difficult was it to identify the Sea of Tranquility as an ideal lunar landing spot?

The Sea of Tranquility was only one of five landing sites that were selected for being in the equatorial region, and flat enough and free of blocks of rock to be safe for the first landing.

We can now do a basic form of remote sensing from home with Google Earth (or Google Moon). What has been the biggest technical leap as far as remote sensing is concerned since the formation of the Boston University Center for Remote Sensing?

Actually Google is it, because it has allowed people worldwide to enjoy the marvels of the Earth and the moon (and soon other planets and stars and galaxies of the universe). It is wonderful to see that these hard-to-obtain images are now in the hands of the young everywhere.

The center uses space technology to better understand archaeology, geography and geology. Give us an example of an archaeological finding you’ve been involved with.

An example of allying remote sensing to archaeology was done at the base of the Great Pyramid in Egypt. A sealed chamber containing a disassembled boat was mapped by ground- penetrating radar and thoroughly photographed. Its air was sampled and the temperature, air pressure, etc., were measured. This was all done in a nondestructive way by applying remote sensing techniques in order to preserve the wood of the 4,600-year-old boat.

Do you worry about any privacy issues with respect to remote sensing technology?

Remote sensing technology is just like any other tool that science discovers and engineering puts into human use. It can be applied to help people find water beneath a desert, or to select a site for bombing that would do the most damage. So, it is the criminal mind that can misuse the wonderful inventions of humanity.

Are you driven more by humanitarian concerns than in the past? Explain how the plan for Darfur (the wells) would help promote peace.

I feel most accomplished when my work results in the location of water for people that need it most – particularly in dry desert regions. For this reason, the work that culminated in the mapping of the boundaries of a major lake in Darfur is most significant. The provision of water to all who need it in this troubled region would ameliorate the human crisis.

You have helped to dispel the notion that deserts are created by humans. Your center also monitors environmental changes that could be caused by human activities. Do you find yourself in the middle of global warming debates? Do you have political views or only scientific views about this?

Scientific data shows us that nothing is constant on the Earth except change – climate is particularly changing. There is also proof that it changed more vigorously in the past. Having said that, we know for certain that CO2 is increasing in the atmosphere, and this is most probably due to the burning of fossil fuels. We need to do our best not to exacerbate the present rate of change.