Missouri S&T won the Great Lakes Football Conference championship in 2008 and the league’s all-conference team was a reflection of that. The Miners had 13 players chosen for the squad and won six additional awards for their performance.

The Missouri S&T swimming team finished the three-day Mizzou Invitational in December with 15 automatic qualifiers for the NCAA Division II Championships that began in Houston, Texas, on March 11. This marks only the second time in school history that 15 swimmers have gone on to the national meet. 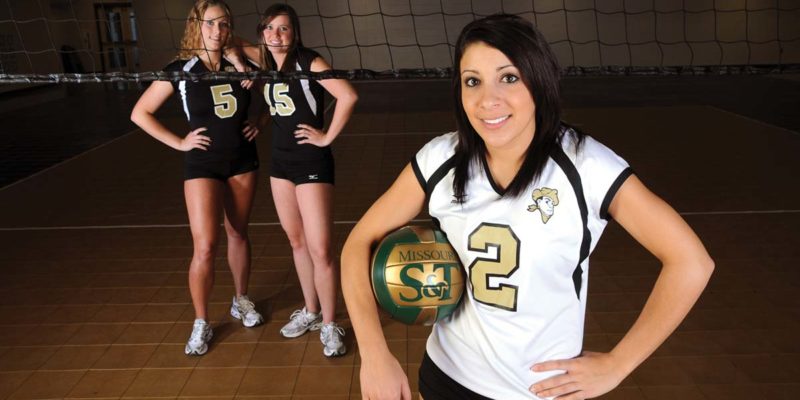 Bridget Williams: A shirt of a different color

Sophomore Bridget Williams is the easiest volleyball player to find on the floor. Just look for the player wearing a different-colored jersey.

The Missouri S&T volleyball team was ranked 16th in the nation in NCAA Division II in home attendance during its first season of competition in 2007. The Lady Miners averaged 443 fans per home contest, which was the best mark in the Great Lakes Valley Conference.

Missouri S&T is the top-ranked institution in the Great Lakes Valley Conference and among the top 20 schools in NCAA Division II for the second straight year in the National Collegiate Scouting Association rankings. The Miners are ranked 19th in the 2008 listing.

How sweet it is

The best women’s basketball season in Missouri S&T history ended in the championship game of the NCAA Division II Great Lakes Regional as Northern Kentucky handed the Lady Miners a 60-52 defeat in Springfield, Mo. The loss, which came after victories over Michigan Tech (75-66) and Quincy (79-73) in the first two rounds, brought the […]

M-Club annual awards given out

The M-Club at Missouri S&T held its annual awards banquet and two of the school’s most celebrated student-athletes received the Gale Bullman Awards: Ashton Gronewold, who set numerous records during his four-year, All-America career on the football team, and Kandi Wieberg, who did likewise for the softball team for the past four seasons.

Missouri S&T had three representatives at the NCAA Division II Track & Field Championships in Walnut, Calif., May 22-24, led by All-American Jordan Henry, who entered the meet as the fifth-ranked pole vaulter in the nation with a top mark of 17 feet.

From hardscrabble, “country academy” roots, how we became a global research university Rolla in [...]

Since our founding, S&T and innovation have been tightly connected. From advances in materials,[...]

Several authors have written history books about S&T, but no tome can contain all the informati[...]

As Missouri S&T launches its 150th anniversary celebration, the world continues to recove[...]

© 2020 - Curators of the University of Missouri | UM System | Privacy Policy
Missouri S&T is an equal opportunity/access/affirmative action/pro-disabled and veteran employer and does not discriminate on the basis of sex in our education
programs or activities, pursuant to Title IX and 34 CFR Part 106. For more information, see S&T's Nondiscrimination Policy or Equity and Title IX.