When did you get started in running and why?

Mindy: I started running in the summer before we entered the fifth grade. One of our older brothers asked if Lisa and I wanted to go to the track for a practice and we decided to try it. Well, we at least survived our first attempt at running on the track and it helped that Lisa and I became running buddies from then on. 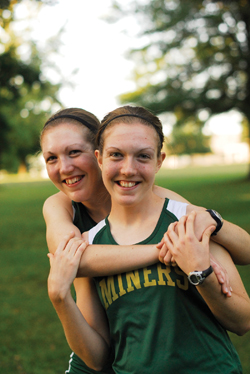 Why did you get into distance running?

Lisa: At that first practice I was taken to, I could barely run even just a lap on the track, so I’ve definitely come a long way since then. Distance running is what my brothers did, and I just sort of followed in their footsteps.

What did you learn from your first season of running at the collegiate level?

Mindy: I learned how to relax more in a race. Not that running is a relaxing sport, but I found that when I quit worrying about everyone else around me and loosened up, I did better.

What would you consider to be the highlight of your freshman season?

Lisa: For the 5-kilometer race, I was able to take almost a minute off of my best high school time.

Mindy: My race at the Missouri Southern Stampede in Joplin is definitely the highlight. I broke my high school personal best time for the 5-kilometers by over a minute to hit my new mark of 19:42.

What would you like to accomplish over the next three years at Missouri S&T?

Mindy: I want my times to keep getting better every year, especially as I gain more experience in racing. Through this I hope to be a strong member of my team.

Lisa: If I can keep improving my race times every year, that would be great, so mostly I just want to keep getting faster and be a solid contributor to my team.