Predicting earthquakes by analyzing the past 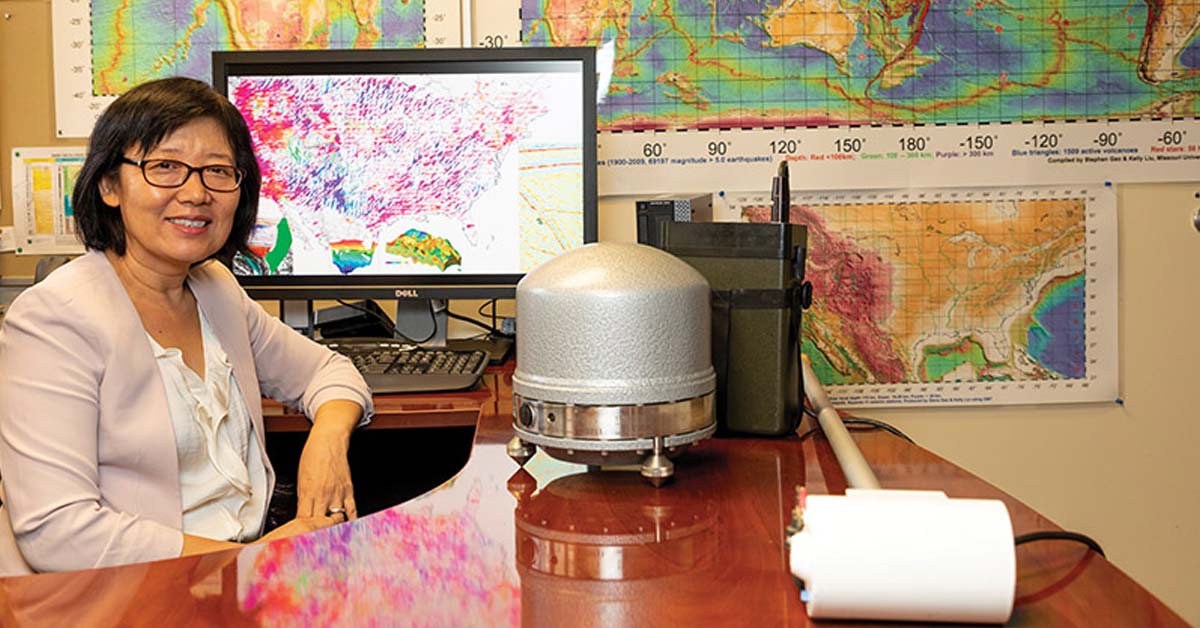 Dr. Kelly Liu and her team bury sensor devices in the ground for up to a year to collect seismic data.

This past summer’s southern California earthquakes, one a 6.4 magnitude and another a 7.1 magnitude, make accurately predicting when and where the next one will occur more important than ever.

With funding from the National Science Foundation Geophysics Program, Kelly Liu, a professor of geosciences and geological and petroleum engineering at Missouri S&T, is doing just that. Liu is digging deeper into the earth’s past data by analyzing shear-wave splitting.

Shear-wave splitting is when a wave originating from an earthquake travels through a directionally dependent area formed by plate motion, causing it to split into two waves.

“The relative movement of the tectonic plates against each other produces majestic mountains and deep ocean basins, but also causes earthquakes and volcanic eruptions,” says Liu, who is working on the project with Stephen Gao, Curators’ Distinguished Teaching Professor of geology and geophysics. “Improving our understanding of such processes is essential not only for understanding how the earth works, but also for achieving the ultimate goal of reliably predicting and mitigating natural hazards.”

Liu is analyzing wave data from 1980 to present. She says that previous shear-wave splitting studies were mostly conducted under the assumption that there is only one layer of anisotropy and the tendency for waves to travel along certain areas, much like wood tends to split along the grain rather than against it.

“The recent dramatic increase in the number of seismic stations and recorded earthquakes suggests that the actual situation is more complicated than this single-layer assumption,” says Liu. “This project will develop and test a set of sophisticated tools to systematically investigate complex anisotropy on a global scale, for the purpose of providing constraints on a number of hypotheses related to plate dynamics and plate motion.”

Because the seismic processes that lead to tsunamis, earthquakes and volcanic activity happen deep in the earth’s core, they can’t be directly observed. That’s where Liu’s work comes in.

“Indirect tools, such as relying on computer analyses of a large amount of geophysical data collected at the earth’s surface, are essential for accurate and useful predictions,” she says.