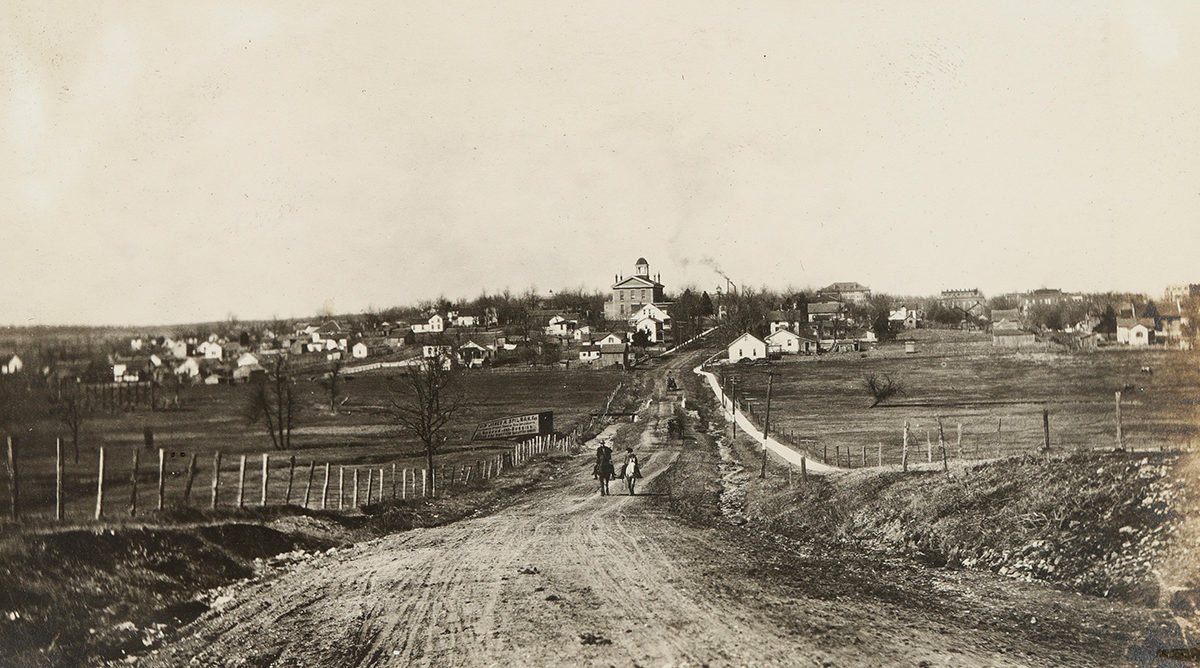 View of city from a distance. Courthouse visible

In the 1870s, Rolla seemed an unlikely location for a new college. There were only about 1,400 residents in a community with more saloons than houses of worship. There were no paved streets, sewers or water mains. To visitors, there seemed to be as many dogs, hogs, horses, ducks and geese as humans walking the dusty streets.

Yet, Rolla became the home of the University of Missouri School of Mines and Metallurgy in 1871. Over the following 150 years, the university evolved from a “country academy” to a respected technological research university. Despite two name changes and the growth of academic programming beyond mining and metallurgical engineering, graduates continue to identify with their school’s heritage and proudly call themselves Miners.

Forged in Gold: Missouri S&T’s First 150 Years is fundamentally the story of the campus’s commitment to its land grant mission. Most of the students were Missourians of modest means. They were the young people who U.S. Rep. Justin S. Morrill of Vermont had in mind when he promoted the Land Grant College Act of 1862. Morrill was a passionate advocate of providing access to higher education for the “working classes,” specifically in the study of “agriculture and the mechanic arts.”

The best of the staff and faculty always knew why they were at MSM, UMR and S&T. Whether they worked in an academic department, in the administration, in student affairs or in physical facilities, their job was to help students be successful. They not only understood that mandate, they embraced it.

Forged in Gold is also about how the campus’s rigorous curriculum and the necessity of many to have part-time jobs left precious little time for relaxation, reflection and recreation. However, regardless of the era, Miner students created a world of social organizations, fraternities and sororities, department clubs, and intramural sports that afforded breaks, however brief, from their studies.

One of the biggest challenges for the Miner campus was how to make it more welcoming to underrepresented groups. Forged in Gold describes how difficult it was for African Americans, women and the LGBTQ (lesbian, gay, bisexual, transgender, and queer or questioning) community to become accepted as Miners.

Along the way, Forged in Gold details some of the campus scandals and pranks, influential faculty and staff, the roles Miners played in America’s wars, athletics, and the Miners who have had an impact on the world.

The comprehensive coffee-table style history book won’t be in stores until October 2020 but when you pre-order today, you will be among the first to dig deep into the university’s history.