A milestone year for giving 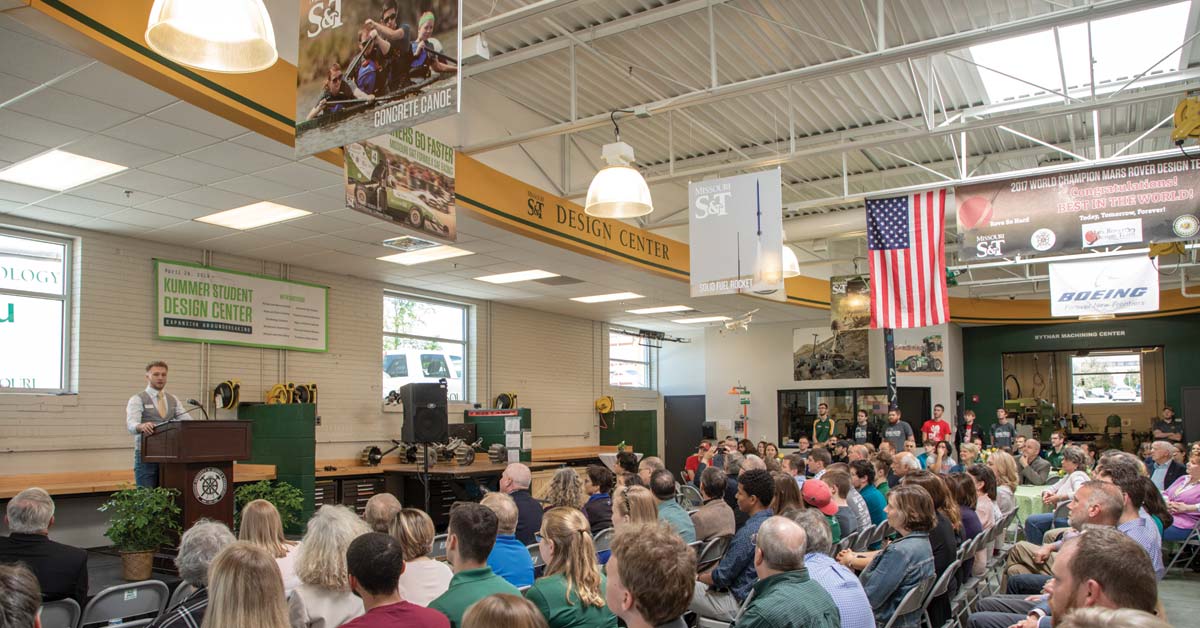 Kummer Student Design Center expansion donors were recognized at a groundbreaking ceremony in April. The expansion will add 8,000 square feet to the design center, home of S&T’s student design teams.

“This growth is a testament to many, but especially to the alumni who continue to prove that Miner pride is a powerhouse,” says Vice Chancellor for University Advancement Joan Nesbitt. “Giving of this magnitude is a resounding vote of confidence in the university, but most of all in our students. Miners are giving back to Miners, just as they have for nearly 150 years.”

Charitable giving to S&T has accelerated, with an increase of 7% over last year, 24% over two years ago and 129% over three years ago. This growth has provided a strong foundation for S&T’s next comprehensive fundraising campaign.

Giving highlights for the year include a $5 million planned gift to athletics from alumni John Gibson, EMgt’74, and Kristie (Capps) Gibson, EMgt’74; a $3.8 million bequest in support of scholarships from alumnus Morton Deutch, MetE’50; a $1 million gift from alumna and trustee Joan Woodard, Math’73, and her husband, James Woodard Jr., to establish the Woodard Associate Professorship for Excellence in Electrical and Computer Engineering; and a $550,000 gift from alumnus Robert M. Williams Jr., ME’74, president and CEO of St. Louis-based Williams Patent Crusher and Pulverizer Co., to fund a 300-seat lecture hall in the university’s new Classroom Learning Center.

Scholarship support also increased thanks to 306 donors who contributed over $6.5 million to the Miner Match, a scholarship program launched in response to the University of Missouri System’s Missouri Promise and Opportunity initiative.

“The donors who give back to Missouri S&T ignite extraordinary possibilities in the lives of our students, in the potential for solution-inspired research and in the leadership essential for solving critical global challenges,” said Chancellor Mo Dehghani. “This commitment is the cornerstone that drives excellence and defines Miner pride.”