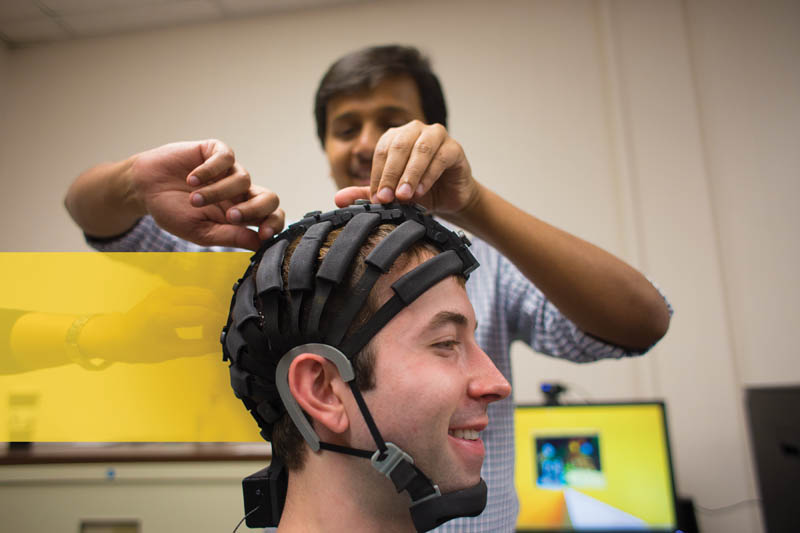 Keng Siau wants to cut out the middle man in market research gathering — paper and electronic surveys — and go straight to your brain to get your opinion.

Siau, chair and professor of business and information technology, is using an electroencephalogram (EEG) headset to scan brainwave patterns. He says it gives more accurate information.

“I receive a lot of questionnaires. But do I have time to fill them out? Most of the time, I don’t. I just put them aside,” says Siau.

He uses the common problem of getting accurate survey responses as an example.

“A lot of times, we want to get information from CEOs, but CEOs don’t have the time and just pass it to their administrative support staff. They are the ones that fill out the questionnaires, not the CEOs. And their opinions will be somewhat different from the opinion of a CEO.”

He also finds that people often answer survey questions based on what they think the surveyor wants to hear. When an individual’s brain activity is monitored, however, “it’s harder to lie, it’s more instantaneous and unfiltered,” Siau adds.

Cognitive neuroscience is an emerging field in information systems and marketing research. Siau and his former research assistant, Yeli Zhao, MBA’14, reviewed several neurophysiological tools used in this field, including the EEG, as well as functional MRI (fMRI), positron emission tomography (PET) and magnetoencephalography (MEG). They outlined the strengths and weaknesses of each tool and highlighted future research directions in the January 2016 edition of the Journal of Database Management.

As expected, Siau and Zhao found a strong correlation between cost and effectiveness among the tools. For example, an EEG headset can only scan the surface of the brain, while a functional MRI can penetrate deeper to retrieve thoughts and emotions. But at $50,000, the cost of a good quality EEG headset is relatively cheap compared to a state-of-the-art MRI scanner, which goes for about $2 million to $3 million.

Siau called the comparative and review research “a starting point.”

“It’s a new way of thinking about and researching previous research questions,” he says. “We have been using surveys as a technique for data collection. Now we have a new technique called cognitive neuroscience that will look at brain activity.