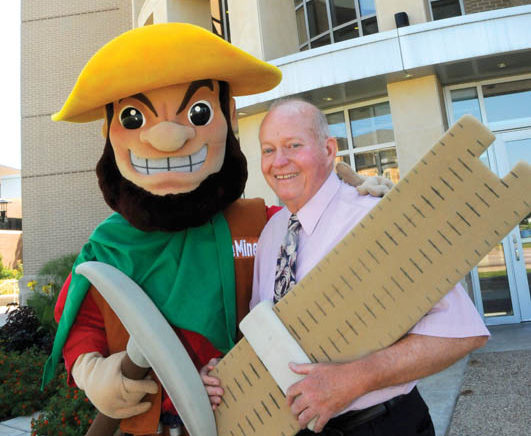 No matter whether you call it MSM, UMR or Missouri S&T, Jerry Bayless has called it home.

Bayless, CE’59, MS CE62, an associate professor of civil, architectural and environmental engineering at Missouri S&T, first came to Rolla in 1955. He joined the faculty in 1959.

Known as “Mr. UMR” for many years and as “Mr. S&T” for several more, Bayless influenced thousands of students during his time at the school.

“There’s nobody who has made such an impact on our students in our almost 150 years of civil engineering education in Rolla,” says Joel Burken, Curators’ Distinguished Professor and chair of civil, architectural and environmental engineering. “He has influenced many, many students, helping those who are struggling to stay in school and see it through. That’s day to day, not just a special occasion. That’s who he is.”

In 2011, Bayless was asked what course was his favorite to teach.

“I can narrow it down to three,” he said. “Fluid Mechanics, Reinforced Concrete Design, and Structural Analysis. Slide Rule would rank high, also, but I haven’t taught that in 35 years!”

Bayless has served as an assistant to the chair of civil engineering and as the assistant dean of engineering. In 1990, he became associate dean, and in 2004 he received the Chancellor Medal. Bayless is a recipient of the Alumni Merit Award, was an honorary St. Pat and parade marshal, and in 2011 he was named one of Missouri S&T’s inaugural class of Alumni of Influence.

Bayless was active in the Miner Alumni Association for decades, first serving as a section leader and later as a member of the board of directors. Bayless served as the board’s treasurer for 20 years. He is an honorary member of the Academy of Miner Athletics and was inducted into the Academy of Civil Engineers in 1986.

“He stands for what S&T stands for,” Burken says. “Excellence in preparing students.”