Have a seat in the chair of the future 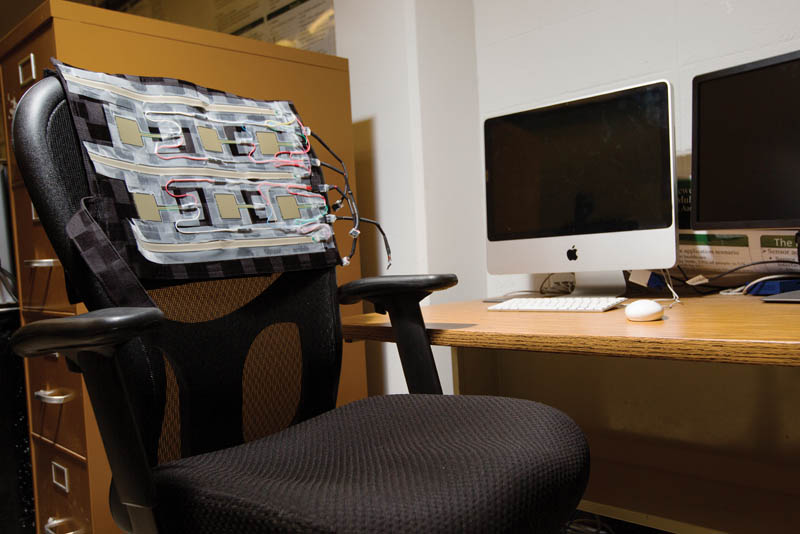 Recent studies report that the average person spends 13 hours a day sitting. That’s a lot of time spent in a chair.

But what if that chair could help detect not only your daily behavior, but your mental state, too?

That’s exactly what the “Care Chair” designed by computer scientists Debraj De and Sajal K. Das is designed to do.

The researchers have developed a chair that could help detect the behavior and mental state of elderly people at home or in assisted-living facilities — specifically those people who are susceptible to dementia.

The device, which slips over a chair’s backrest, uses four sensors to track functional and emotion-based behaviors throughout a day.

It uses the same principle as law enforcement interrogators or customs agents who detect micro facial expressions that last only a fraction of a second but can reveal a person’s true emotions.

For the study, De had participants engage in 19 sedentary activities in the chair. He tested static activities like napping and sitting still; and movement-based activities like looking back left and right, moving their head side to side, nodding and waving hands. He also tested user-functional activities like talking, sneezing, coughing, drinking, eating and hiccups; and emotion-based activities like crying, laughing, shouting, weeping, yawning and yelling. Each activity triggered the sensors in unique ways, giving the researchers a baseline for comparison.

De and Das are working with Phelps County Regional Medical Center on testing. The team is collecting and analyzing data for cognitive health assessment in elderly people prone to dementia, and in slowly rehabilitating patients with cognitive impairments, like stroke victims or cancer survivors.

On a wider scale, Care Chair sensors could give doctors, nurses and home healthcare providers a better understanding of their patients’ activity level, which in turn could help determine the best level of care needed.