A future in control 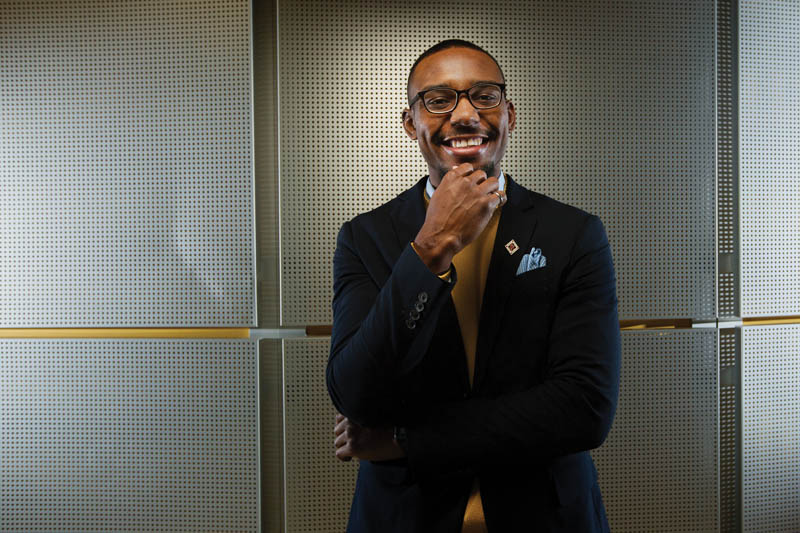 As a high school senior, George Leno Holmes Jr., ME’16, saw two clear paths for life after graduation. “I was either going to join the Air Force or become a mechanic,” he says.

But his grandmother and a cousin saw a different path for the bright, mechanically inclined student.

“Granny,” as Holmes calls her, had been saving money to send him to college. She and Holmes’ cousin — whom he describes as “a brilliant engineer” who lacks a college degree — urged him to study engineering at Missouri S&T.

So Holmes and his father made the trip from St. Louis to tour Missouri S&T. As he walked around campus, Holmes told his dad, “I could see myself here.”

Today, Holmes is still here — and sees new possibilities for his future.

Last summer, he began working toward a Ph.D. in control system engineering, which focuses on the design of robotic systems, among others. He is studying under the direction of S.N. Balakrishnan, a Curators’ Distinguished Professor of aerospace engineering and a leading authority in the field.

Holmes is one of dozens of GAANN Fellows at Missouri S&T. GAANN (Graduate Assistance in Areas of National Need) is a U.S. Department of Education program designed to get more Ph.D. students into the nation’s universities — and to eventually get them to pursue careers in research in academia, national laboratories or the private sector. Holmes applied for the program at the urging of Robert G. Landers, a professor of mechanical engineering who taught one of Holmes’ favorite undergraduate courses, Modeling and Analysis of Dynamic Systems.

“George was that rare student who sought a deep understanding of the material and always came to my office hours to discuss the material,” Landers says. “George is a leader and has the curiosity and intellect to have a stellar career in research; therefore, I knew the GAANN program would be a perfect fit for him.”

Holmes also worked as a grader for Landers’ course the following semester. “Not only did he grade quizzes and assignments, he reviewed all of my notes and provided feedback on how the course could be improved to maximize student learning,” Landers says.

Improving processes and systems is something of a pastime for Holmes. While he remains undecided on a specific direction for his GAANN research, he hopes his advanced studies will lead to a way to either “decrease inefficiencies or decrease drudgery.