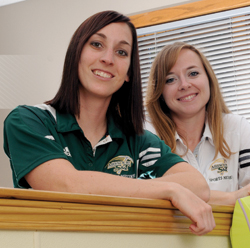 When athletic trainers go through certification to administer cardiopulmonary resuscitation or use an automated external defibrillator (AED), they rarely think they will actually have to use that training in real life.

But on May 23, Missouri S&T athletic trainers Samantha Welter and Elizabeth Sisemore had to use that training. And their actions saved the life of a man in the Student Recreation Center.

Tom Brown, a regular participant in lunchtime basketball games in the facility, was preparing for a pick-up game that afternoon when he collapsed. Thanks to the immediate response of assistant basketball coach Joey Goodson — the first to check on Brown after he fell — and assistant football coaches Nate Saum and Brett Sykes, Welter and Sisemore were tracked down to attend to the situation.

“Both of us were in the front office at the time and the coaches told us that someone had passed out,” Sisemore recalls. “When I got in there (approximately two minutes after it happened), he was not responsive and was having trouble breathing. Sam went to get the AED device while I started to perform CPR, then when she got back we started a two-person CPR.”

The athletic trainers then used the AED device to deliver an electric shock that restored the heartbeat and revived Brown just before medical personnel arrived.

Welter says it was just a matter of reacting instinctively to the situation.

“We didn’t have time to think about it; we just had to do it,” Welter says. “The whole thing lasted about five minutes, but it felt like it took forever. I will say that everything that happened went the way that it should have. Everyone worked together very well and was very helpful.”

A few days later, the local emergency personnel who arrived on the scene cited the two athletic trainers, both in their second year on the Missouri S&T staff, for their quick response and the use of CPR and the AED.

“The AEDs proved to be 100 percent effective,” Sisemore says. “The devices are very instructive and tell you everything to do, as well as keep a record for medical personnel of all the information while treating someone. This has helped us as well with EKGs (electrocardiograms) so we know more to prevent this from happening in the future. We’ve also added more machines in the facility.” There are now 12 AED devices in the building.

And thanks to the fast action of Welter and Sisemore, Brown will soon be able to return to the basketball court.