Pat McNamee: we are family

Pat McNamee, who just completed his junior season with the Missouri S&T men’s soccer team, was one of many players who reaped the benefits of one of the most memorable seasons in the history of the program. 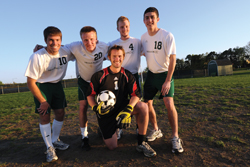 As the Miners were earning a share of the Great Lakes Valley Conference regular season championship and landing the team’s first berth to the NCAA Division II Tournament, McNamee and sophomore defender Spencer Brinkmeyer – became the first players in the history of the men’s soccer program to earn All-America honors. The Miner defensive unit was a big part of the story in the 2010 season, as it posted a school record 11 shutouts and ranked as one of the top teams in the nation on that end of the field.

McNamee, the GLVC’s Defensive Player of the Year, had 0.67 goals against average and posted nine of the shutouts on a solo basis.

What is the biggest thing you took away from the 2010 season?
There are really two things. First, is just how far the program has come. I was fairly familiar with the program before I got here because my brother, Mike, was the goalie on the team. I knew the team had some potential, but were still trying to find their way in the GLVC. My freshman year was Coach (Joe) Ahearn’s first year here and the team had a lot of things we needed to improve on if we ever dreamed to advance in the postseason. He has really changed the culture of the team and how we go about our business. In turn, the team has really bought into his system and every year we keep getting better. I am very proud of how far we have come in just four years.

Probably the best thing I can take away … is how close the guys on the team are. It really is a family-type atmosphere and I believe that shows on the field. We all get along extremely well and are best friends off the field. We never have off-the-field issues and we are always on the same page. Many of us either room together or take similar classes and help each other out whenever needed. The biggest thing I will not only take away from this year, but in my entire career here, is all the lifelong friendships I have made.

What was the key to the team’s success last year?
A lot of us were disappointed in the way the previous two seasons had ended. In both years, we made it to the first round of the GLVC Tournament and lost to Northern Kentucky. We had outplayed them in each game and it was incredibly frustrating making that long bus ride back from Kentucky to go home empty-handed. We all had a chip on our shoulders and I believe that really drove our success.

We took a lot of pride in our defense and it was something the entire team rallied behind. In the off-season, we were able to add a few new pieces to our game to make us harder to score on and that allowed us to become more creative on the offensive side of the ball. We also had a great core of juniors and seniors that really set the tone for the entire team. The experience we gained from the past couple years really helped us stay focused down the stretch.

After the regional championship game with Northern Kentucky – and then seeing NKU win the national championship – did you and your teammates get a sense that we can make a run at it ourselves in 2011? Is that something the team has talked about at all?
Oh, absolutely. We played NKU three times this year and every game came down to the wire. I think both teams sensed that we both had a legitimate shot at the national championship this year. Having the number of players coming back from the team last year really gives us a lot of confidence going into next season. We have been a fairly young team the past couple seasons — and we all are grown up now and ready to take the program to the next level. We’re very excited about next season.

You and Spencer Brinkmeyer are the first players in the history of the men’s soccer program to earn All-America honors. What did you think when you heard the news?
I was quite surprised, to be honest. It is a tremendous honor and I think it belongs to the whole team. They are the ones on the field running around preventing the ball from even getting to me. My job is just to clean up what happens to get past them and this year that didn’t happen very often. If it weren’t for the nine other guys in front of us, Spencer and I would not have received these honors. I have been very humbled by the experience and look forward to building onto the success of last year.

When did you get the feeling that we had something special with this squad?
After the 2009 season ended, I knew we had a great group of guys coming back for the next year. I remember telling a few friends over the summer that I had a feeling this could be the year. We were still underdogs in the conference and had a chance to surprise a few teams. It was after the Southern Indiana game that I really knew our chances for postseason and a possible NCAA berth was pretty good. We had already knocked off Rockhurst and Drury and we were coming off a five-game win and shutout streak. We were starting to climb in the regional rankings and held a strong position in the GLVC. It was the best place we had ever been at that point in a season and we still knew there was still a lot to play for.

During your first year at Missouri S&T, you were a redshirt while your brother played in goal. How much did you learn from him that season (or anywhere along the way) and is there anyone else you have learned from as a goalkeeper?
I wouldn’t be in the position I am now without Mike. I trained with him once, sometimes twice, a week since I was about 13. He is the hardest working player I have ever played with. Just watching Mike during training sessions taught me how to become a better player. That was just the physical part of the game. My freshman year was when I learned my biggest lesson from him, the mental side of the game. He never lost his composure or focus which was something I was working to improve at the time. I really matured as a goalie after watching him that year. Even now while we are in season, when I call him to give weekly updates on our games and how we did, I will stick pick his brain to see what he would have done in certain situations.

I also learned a lot from my goalie trainer back in St. Louis, Duane Kloepple. Mike and I both started training with him when we were 13. Duane really pushed me to succeed. I had a game in high school and my team lost 6-1 and after the game he told me we could have won the game if I worked as hard as Mike did. Duane taught me to be technically sound and to always push myself to reach my full potential. He was a very important part of my development as a player. Duane taught me the importance of being a dedicated player and Mike showed me how to do that.

When did you start playing soccer and how long have you played in goal?
I started playing when I was five years old. My first game in goal came when I was 8 years old and I was the goalie in my grade school team and high school team. I was never a full-time goalie until my junior year of high school. I was the stopper for my club team until I told the coach that I wanted to switch to goalie full time.