Most people would provide a list of adjectives when describing themselves. Will Kirby, ArchE’08, CE’08, on the other hand, provides a statement: “On the move.” 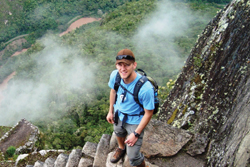 “In my brain, there is always something in the works; I love to travel, go on adventures and explore,” says Kirby, a native of Elkhorn, Neb.“I’m definitely a dreamer and an explorer, but I’m also a realistic and practical person.”

During his time at Missouri S&T, Kirby was a four-year starter for the S&T soccer team and was heavily involved in Engineers Without Borders. Upon graduation, he negotiated a later start date with Burns & McDonnell to work with Engineers in Action in Bolivia for four months.

Currently, Kirby’s impressive volunteer involvement includes holding an officer position for EWB’s professional chapter, being a newly elected Engineers in Action board member and helping lead the Burns & McDonnell/Spaces Inc. team in Project Change, a community service-based competition that benefits a multitude of charities in the Kansas City area.

“S&T got me active in service; Kansas City and Burns & McDonnell have provided me with many opportunities to continue.”

“S&T got me active in service; Kansas City and Burns & McDonnell have provided me with many opportunities to continue.”

When he is not volunteering, spending time with friends or enjoying his hobbies, Kirby is a civil engineer in the Transmission and Distribution Services Division, working with the Overhead Group. His primary duties include collaborating with utility companies in the design and coordination of high voltage overhead transmission lines nationwide.

As for his next big adventure, Alaska tops the list. “However,there’s a little soccer tournament going on in Brazil in 2014,” Kirby says. “I could just as easily spend a month traveling around supporting our U.S. soccer team.”