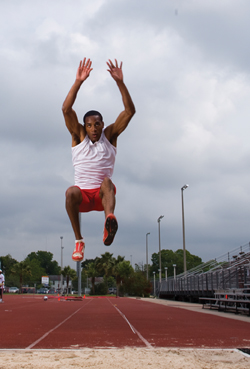 “Once I had three meets in five days, in Italy, the UK and Germany,” he says. “Then I was back to the U.S.A. It was exhausting.”

He wouldn’t change a thing though.“I get to entertain people while doing what I love,” he says. “Nothing is more exciting than the crowd going crazy when you hit a personal best or sneak up and steal a victory.”

“Nothing is more exciting than the crowd going crazy when you hit a personal best or sneak up and steal a victory.”

Smith also enjoys the travel his track and field career affords. “I have the opportunity to travel the world for free,”he says. “I’ve been to more countries than some people have been to states.”

The long jumper moved to the United States from Bermuda when he was 4.He competed in the 2008 World Indoor Championships and placed 15th in the 2008 Olympic Games. He also holds the national record in Bermuda.

Smith recently earned a gold medal and had his personal best jump at the Central America and Caribbean Games held in Puerto Rico in July.

His future plans include attending law school to pursue a career as a sports agent.

Smith was honored to be chosen to compete in the International Association of Athletics Foundation (IAAF)/VTB Bank Continental Cup which was held in Croatia this past September. Four continental teams competed in the event — Americas, Africa, Asia/Pacific and Europe. Each team is allowed two or three athletes to compete in each individual event.

“I was picked for the Americas team,” Smith says. “I’m happy to represent both Bermuda and the U.S.A.”

You can keep up with Smith on his website: jumptyronejump.com.