Hardest lesson to learn: For Robert Rutherford, EMgt’06, the lesson started on April 21, 2010, when he woke up and was told of the mayday call from the Deepwater Horizon hours earlier. 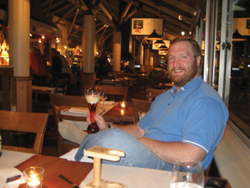 He says it was “a real eye-opener” to learn that even with extensive planning and safety measures, equipment failures and human errors can lead to catastrophic consequences. In the months that followed the Deepwater Horizon fire, he worked on board the Development Driller III (DDIII), one of the two rigs drilling the relief wells, to stop the flow of oil into the Gulf of Mexico and to make sure the wells were drilled as safely as possible.

Rig riding: Rutherford spent about six months in Singapore last year, as construction on the DDIII was completed there. He also was on board the 257-foot by 256-foot rig for the second leg of its tow into the Gulf of Mexico. He boarded at the Cape of Good Hope in South Africa and slowly made the 60-day journey with the rig westward across the Atlantic Ocean. He’s also spent time on two other rigs — Discoverer Spirit and the Cajun Express, both of which can drill to35,000 feet.