Why she does it: Rachel Grodsky, CerE’06, wants more girls to get involved in math and science because it’s a great career for her. She’s an engineering process supervisor for Honeywell FM&T in Kansas City, Mo., managing a team of 25. 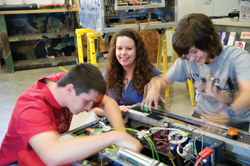 On mentoring a FIRST robotics team: “FIRST (For Inspiration and Recognition of Science and Technology) robotics is an intense engineering challenge for students where they have six weeks to design a fully functional robot from scratch. I volunteer with a rural team and was told I was the first female ‘role model’ in science and engineering that these students had ever had. The greatest part is when girls who are reluctant to join the team are, by the end of the year, excited about going into math or science.”

The results: This year the robot had to kick a ball, go over speed bumps and hang from a bar. Grodsky’s team made it to the national competition in Atlanta. “Even though we didn’t win, it was a great experience.”

Leading the way: Grodsky is the only female on the Harrisonville, Mo., Project Lead The Way Board, where she reviews engineering curriculum and works with high school teachers on student projects. “When we hosted an all-girl engineering and science summer camp, I took some time off work to talk to the students about what I do,” she says. “I also went to a local amusement park with them for a science of roller coasters tour.”

Other connections: She also serves as the state of Kansas’s representative for Engineers Without Borders-USA and volunteers as a girl’s volleyball coach in middle school.

Parting words: “Don’t hesitate to take opportunities that come your way — they’re coming your way for a reason.”