Before Nick Christian, NucE’07, ever set foot on the S&T campus — even as a high school student taking part in the Jackling program — he knew he wanted to be a nuclear engineer. That’s why he chose Missouri S&T. 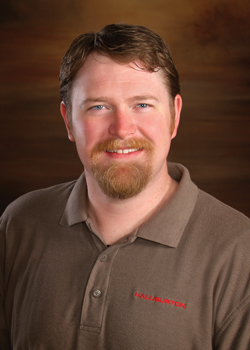 But at Rolla, he enjoyed his other classes too, and after graduation, Christian joined Halliburton’s wireline and perforating services team, which evaluates oil, natural gas and other reservoirs. Today he serves as a senior field professional for the company.

The work requires him to stay “cool, calm and collected,” and has taken him up and down the West Coast.

“Right out of school I was in charge of a crew.”

“Right out of school I was in charge of a crew,” Christian says. “It’s difficult to manage people who have worked in the industry for more than 10 years. Some people want to do things the way they’ve always done them. But times have changed, and safety is a top priority, rather than just getting the job done. It’s important for everyone to return home safely.”

When it comes to drilling oil wells, Christian says most people think of the major players. But Christian’s favorite assignments are those serving independent companies, or even regular citizens who’ve pooled their resources to see if they can strike oil.

“You can easily lose your head in this job, but I try to figure out the problem and move on,”says Christian. He likes to unwind by reading Philip K. Dick novels and listening to his vinyl record collection, which includes Pink Floyd, Led Zepplin and BB King.