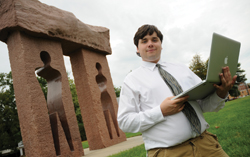 Eloe was one of 1,026 students from 69 countries accepted into Google Summer of Code, a global program that offers student developers stipends to write code for various open-source software projects. Thousands of students from all over the world apply and Eloe was fortunate enough to be selected for the program.

“Google Summer of Code was a great experience for me.”

“Google Summer of Code was a great experience for me,” Eloe says. “I was able to build a project based around my interests and the needs of an organization. The project that emerged ended up being a combination of things I worked on as an undergraduate tutor and grader.”

Eloe isn’t the typical S&T alum. At age 16, the University of Dayton’s information technology group hired him. During college, he spent his summers doing research at Missouri S&T and Wright-Patterson Air Force Base. But he still found a way to earn two majors and two minors, including S&T’s new theatre minor, in just four years. Eloe is back on the Rolla campus now, pursuing a Ph.D. in computer science.

Away from the computer, he enjoys singing, acting and playing piano. Next spring, he’ll even direct an on-campus production of Godspell. “In high school I was able to participate in the show as a chorus member, and I absolutely fell in love with it,” he says.