From engineer to entrepreneur: Michael Ojo, ECE’07, MBA’08, began his graduate studies in computer science thinking that an engineering degree coupled with a computer science degree would be fitting. 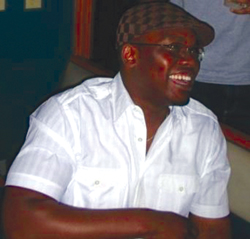 “I managed to make it through a semester,” says Ojo. “Weeks before my last exam, I really understood my passion in life: food!” He turned in his final exam and made a beeline to the business department to pick up an application for S&T’s new MBA program.

It all started when …: “The history and industry (of brewing) is very fascinating to me. I didn’t become interested in brewing until my trip to Eastern Europe and West Africa. Then I began reading up on beer-making and eventually tried it out. After a couple of brews, I convinced my colleague to start brewing, too. We toyed around with the idea of starting a brewery and came up with the name Fountainhead. Since then I’ve been more aggressive with creating new beers and laying the groundwork for the business.”

Not sold in stores … yet: Founded in 2009, Fountainhead Brewing Co. is currently in the “R&D stage.” Nearly 30 different products have been made, but eventually only three or four will make the final cut.

He hasn’t quit his day job: Ojo is a consultant for Accenture.

Wise beyond his 26 years: “Figure out what drives you and determine your passion. Understand that there’s a learning opportunity in every lesson life gives you.”