Looks good on a resume: Michael Lancey, ArchE’06, was the on-site project engineer for the construction of the new Yankee Stadium, a $1.3 billion project in the Bronx, N.Y. Engineering services were provided by Lancey’s employer at the time, Thornton Tomasetti, a firm that specializes in high-rise buildings and sports venues. 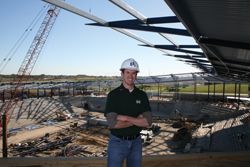 On meeting The Boss: “I was one of only a few workers left on site one day when a random call came in that George (Steinbrenner) wanted to see the progress of the new stadium. I got to help escort him around the infield. It was the first time he had visited the site since the groundbreaking ceremony. We were nervous, but he was very impressed.”

As if that wasn’t enough: Lancey also met his wife during his stint in New York.

What he’s been up to lately: Lancey was involved in the construction of a new arena for the Pittsburgh Penguins professional hockey team. Recently, he’s been working on the design of a new 18,500-seat stadium for the Kansas City Wizards soccer team.

Non-stadium projects: With his new firm, KH Engineering Group in Lenexa, Kan., Lancey is involved in a project to renovate a military barracks building at Fort Leonard Wood, Mo.

Other stuff: Lancey is the executive director for the Kansas City chapter of the ACE Mentoring Program, which introduces high school students to the architecture, construction and engineering industries. He also helped start a chapter in the Bronx when he was working on the new Yankee Stadium.