Digging into the history of the St. Pat’s tradition as a student intern in the Missouri S&T Archives proved to be good preparation for Katy Bloomberg’s career. These days, Bloomberg, Hist’06, puts together briefings for congressional hearings on military training and travel for the U.S. House of Representatives’ Armed Services Committee. 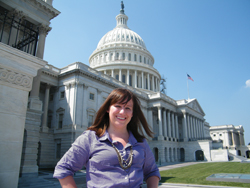 “My research experience in the archives has come in incredibly handy.”

“My research experience in the archives has come in incredibly handy,” says Bloomberg, who serves as a staff assistant for the readiness subcommittee of the Armed Services Committee. She joined the congressional staff in May 2009, after completing her master’s degree in history from the University of Missouri-St. Louis.

A native of Jefferson City, Mo., Bloomberg has been interested in politics and the military for much of her life. During her final weeks as a grad student, she worked in the Jefferson City office of U.S. Rep. Ike Skelton, who chairs the Armed Services Committee. Now she works most closely with U.S. Rep. Solomon Ortiz, D-Texas,who chairs the readiness subcommittee.

Bloomberg plans hearings, distributes information to subcommittee members, summarizes legislation and assists in briefings. With hearings held every three weeks or so, “frequently I’m invited to help brief” Ortiz about “who the witnesses are going to be, the main concerns for the hearing and other issues.”

While some of her friends think staffing a politician’s office rather than a committee would be more glamorous, Bloomberg is happy with her chosen niche.

“A committee is a unique thing,” she says. “People are like, ‘Oh, man, too bad you don’t work for a congressman.’ But staffing a committee, I get to work for 60 members instead of just one.”