Jon Reinagel, Phys’07, didn’t make a great impression on his future wife, Carla (Cotita) Reinagel, Engl’07, during their first meeting. As an RA serving a Hawaiian-themed meal to new students moving into the Quadrangle residence halls, he was dressed in a hula skirt with a coconut bra over his shirt. “I thought he was really weird and actually tried to avoid him,” Carla says, “but he came over and talked to me anyway.” 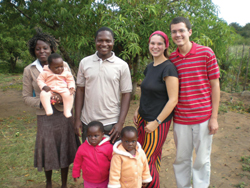 Things went much better a couple of days later, when the two met again at a Rolla church. By then, Jon had traded his hula skirt for more conventional clothing. “I was majoring in English and education with the goal of teaching in Asia someday while doing mission work,” Carla says. “I asked Jon what his major was and what he wanted to do with it. He responded, ‘My major is physics and education, and I want to use it to teach in Asia someday while doing mission work.’”

The two married a week after Jon graduated in May 2007. Within two weeks after Carla graduated that December, the Reinagels entered the mission field.

But instead of traveling to Asia, they ended up in the African nation of Mozambique. Working with Iris Ministries, the Reinagels live in a mission base in Dondo, a village of 15,000. There they work with fellow mission workers at the base’s children’s center and Bible school. Jon handles many administrative tasks at the center, including governmental relations, human resources, and budgetary and financial issues. Carla has scaled back much of her responsibility since having their first child, Kyran Jay, last spring but still oversees “hospitality,” working with short-term missionary groups and other visitors.

The two decided to go to Mozambique after reading about the work of Iris Ministries founders Rolland and Heidi Baker. They felt it would be a good training ground.

“Mozambique is a good place to learn.”

“Mozambique is a good place to learn,” says Jon. “It is one of the poorest countries in the world, but is doing much better than it was 15 years ago. I wanted to go where there was a big need, but more importantly, I wanted to go somewhere where I could test my faith. … I wanted to really practice loving my neighbor.”