Early vision: Jeremy Schnurbusch, EE’05, knew early on what he wanted to do when he grew up. “My dad owns St. Louis Avionics. It was ingrained in me since I was a little kid — I always wanted to work in aviation.” 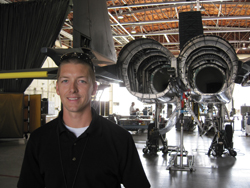 Why his job is awesome: He works for Boeing at Eglin Air Force Base in Florida, testing the new avionics, software and weapons installed on F-15 fighters. “I get to work on Air Force fighter aircraft every day. The jets’ capabilities and systems are constantly being upgraded — we have to make sure these new capabilities are working as they should.” He and his colleagues plan test missions, write flight cards (in-flight instructions) for the aircrews and attend mission briefings to answer crew members’ questions. “It’s the most fun job I have had, but it also carries a lot of responsibility.”

Living on the coast: His favorite place to be when he’s not with F-15s is on the beach with his wife, Kimberly. “We are both very active and enjoy training for 5K, 10K and half-marathon races. A relaxing day is working with my yellow Labrador retriever in the inter-coastal waters, which consists of throwing the tennis ball over and over.”

From testing to flight: Schnurbusch was recently accepted into Officer Training School in the Air Force and was selected to attend undergraduate pilot training. “In five years, I will have graduated from pilot training and should be flying as an active duty pilot. Kimberly and I look forward to going overseas.” He hopes to eventually attend test pilot school.