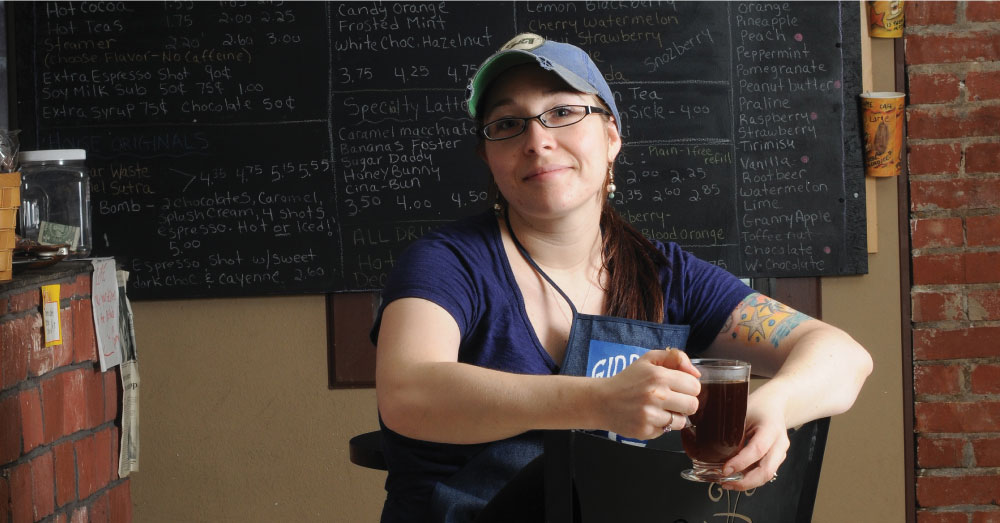 Dugas, Phil’10, is co-owner of The Giddy Goat Coffeehouse, a popular hangout for Missouri S&T students, faculty and staff. Located close to campus — on 11th Street, just east of Castleman Hall — the cafe/restaurant has built a strong following during its five-plus years.

The Giddy Goat opened in 2005, but the original owner, Oliver Amick, decided to sell the business after a couple of years. An online ad to sell the business caught the attention of the 29-year-old Dugas and her fiance, Ben Bell II. They both had experience with restaurant work, and Bell was completing culinary arts studies, so they decided to buy the business. Investing some of their student loan funds, the two took over the shop in January 2008.

Still a student at the time, Dugas worked “at least a hundred hours a week” to get the business established — while carrying a full load at S&T. “It was constant work, then study, work, then study,” she says. “I was so determined to just graduate so I could be here and focus on the business.”

“In philosophy, you learn to listen to different points of view, which you’ve got to do in a business.”

As one of S&T’s few philosophy graduates, Dugas sees her degree as benefiting her work as a small-business owner. “In philosophy, you learn to listen to different points of view, which you’ve got to do in a business.” Especially in a coffeehouse, where “we get a wide variety of topics” and “lots of complaining about finals and tests.”

While listening to and appreciating diverse points of view is important, Dugas has applied an even more valuable lesson from her S&T experience: “Hard work really does pay off.”