Once a shy teenager, Jane Theresa Diecker, NucE’03, today argues the case for increased nuclear energy in the United States. 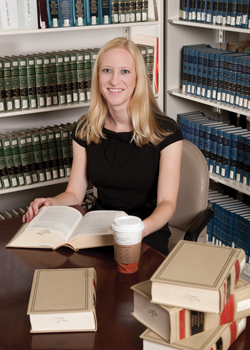 “We need a variety of options to preserve our national energy future.”

“We need a variety of options to preserve our national energy future,” says Diecker, who is now an attorney with Morgan Lewis & Bockius LLP in Washington, D.C.“I believe nuclear power will play an important role.”

“Other law firms also specialize in energy issues,” she says. “But Morgan Lewis has the largest nuclear energy legal practice.”

Diecker got a head start in her career during summer programs at Missouri S&T. After learning about various engineering disciplines, nuclear engineering seemed to suit her best. “I enjoyed the experiments and talking to the current students about theoretical physics,” she says.

Her time at the university was pivotal to her success.

“I was very shy in high school,” she says. “I really came out of my shell in Rolla.” She served as president of her sorority,Chi Omega, and as an officer in the American Nuclear Society, Blue Key and the Panhellenic Council.
Diecker also formed close friendships with her peers in the small nuclear engineering department. “There were only four of us in the program in my graduating class,” she says. “We had a whole row to ourselves at commencement.”

Following graduation from S&T, Diecker earned a master’s degree in nuclear engineering from Massachusetts Institute of Technology. She earned her law degree from Yale Law School in 2008. Prior to joining Morgan Lewis she clerked for a federal Circuit Court judge in Kansas City, Mo.