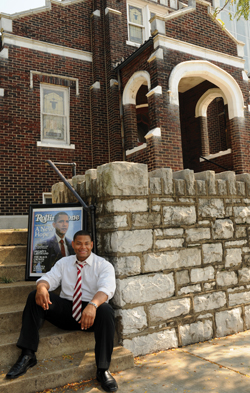 “I called Kenan and told him that I was sorry, but he couldn’t sit in the VIP section,” says Davidson. Then Davidson told Morrison, a St. Louis charter school math teacher, that Morrison would be introducing Obama.

“He was like, ‘Man, quit playing.’ When I told him I was serious, he started screaming like a schoolgirl.”

Davidson didn’t get to meet the future president. But as a staff member for Obama’s campaign, he played a significant role in getting out the vote in five of St. Louis’s 28 wards. Those five wards are in low-income areas of north St. Louis, and voter turnout there was consistently low. “Going in, it looked pretty bleak,” Davidson says. “But I felt that it was a great chance to help get people engaged in the voting process, as well as helping to encourage a new generation to get involved in the political process.”

Interested in politics and volunteering since his grade school days, Davidson helped with a voter-registration drive while a member of the Kappa Alpha Psi fraternity at Missouri S&T. After graduation, he worked on the campaign for Missouri Rep. Chris Carter, a fellow fraternity member whose 61st district includes two of those five precincts. In 2008, while working as a tutor in the Hazelwood, Mo., school district, one of his students told him that the Obama campaign was looking for field organizers. Davidson interviewed for the job and started working that August.

The job involved long hours recruiting and training volunteers, canvassing neighborhoods, hosting events and registering voters. A typical Saturday would start with volunteer training in the morning, followed by door-to-door canvassing throughout the day and voter registration late into the night — and in some unusual places. “I would actually conduct voter registration at night clubs, because that’s where the young people were,” he says.

“I would actually conduct voter registration at night clubs, because that’s where the young people were.”

He also worked with neighborhood churches to get out the vote. “I received a nice amount of assistance from a few churches,” he says.

Davidson remains involved in Organizing for America, the Obama campaign network. For the next two years, he’s working with the NAACP to register 18-year-olds.