In the robotic competition known as Battlebots, hefty machines the size of blood hounds use buzz saws and other weaponry to duke it out in an arena. 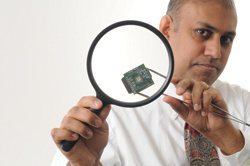 Funded through a $4.465 million grant from the U.S. Army Research Laboratory and led by Jagannathan Sarangapani, the William A. Rutledge-Emerson Professor of Electrical and Computer Engineering, the researchers are developing technology that can detect the presence of various chemicals, electronic signatures and human activity.

The research centers on networks of motes — pocket-sized wireless devices that look like computer chips. The motes can sense and process a huge amount of information, and then relay that information to other motes in the network. Sarangapani says the motes are capable of sharing information with each other and interacting with existing Wi-Fi networks to spread messages. On the battlefield, the motes would be deployed in dangerous areas to effectively “listen in the wind” for evidence that someone is in a sensitive or restricted area.

A network of sensor-equipped motes, ranging into the hundreds in a given area, would be able to track activity. A very important aspect of the research, Sarangapani adds, is network security. The researchers want to make sure valuable information about possible hostile activities is kept out of the wrong hands.

Sarangapani says the chips could eventually be miniaturized to the size of dust particles. He envisions the technology being used in airports and in a wide variety of different industries.

Missouri S&T is working with KalScott Engineering Inc. in Lawrence, Kan., and Avetec Inc. in Springfield, Ohio. The University of Cincinnati is also involved.