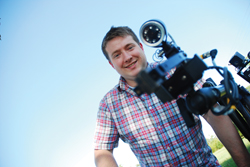 “I get to interact and ‘play’ with some very cool military ‘toys,’ such as robots and armored vehicles,” says Bodenhamer, who’s currently pursuing a Ph.D. in systems engineering at Missouri S&T.

His work has paid off. He’s won government and industry awards for reducing back injuries with building tactical bridges. He’s led an effort to develop and integrate advanced 3D cameras and displays for robots to counter improvised explosives devices. Now he’s one of a handful of government collaborators on a newly formed 10-year, $100 million robotics research alliance focused on improving the state-of-the-art in military robotics.

“I love working in human system integration for the Army.”

“I love working in human system integration for the Army,” Bodenhamer says. “When I finish with my Ph.D. from S&T, I hope to take on higher level roles in Army systems research and development.”

Although Bodenhamer has returned to the classroom, he says he was constantly learning on the job.

“On several occasions I have undertaken a project that was known to be risky and didn’t pan out as hoped,” he says. “The hardest thing I’ve had to learn is how to professionally and graciously wrap up the work and move on. Learning to recognize and admit what you don’t know is a great trait and a wonderful way to learn.”