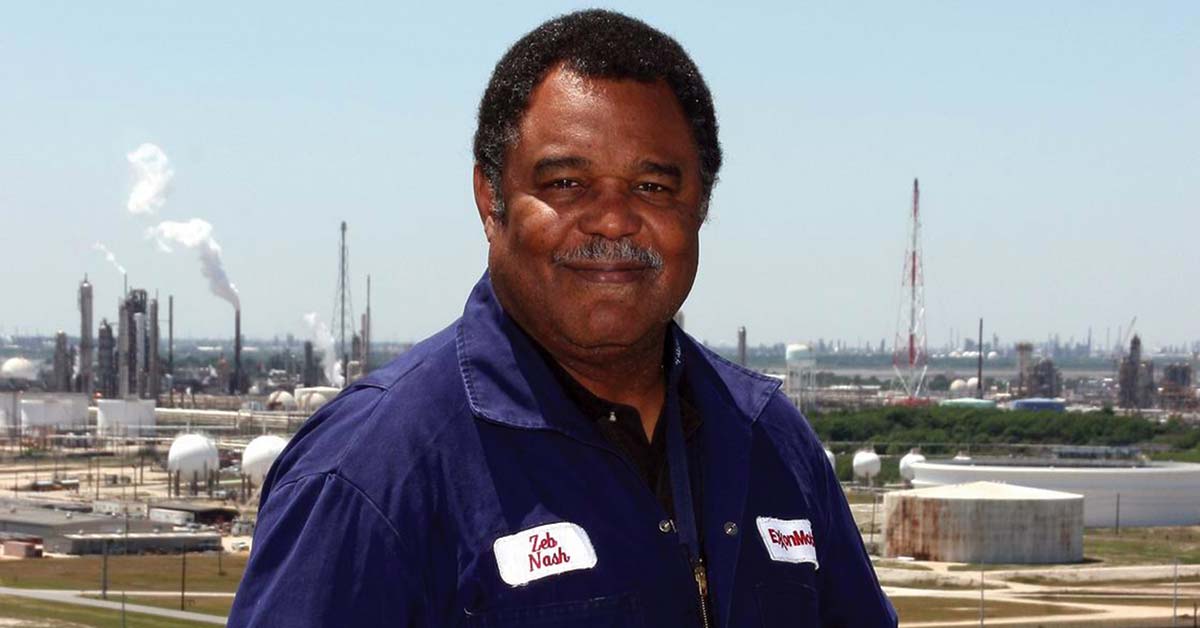 Zeb Nash on the jobsite during his days at ExxonMobil. For his retirement, his co-workers established the Zeb Nash Scholarship through the Miner Alumni Association, raising more than $70,000.

Zebulun (Zeb) Nash, ChemE’72, got interested in engineering as a kid, thanks in part to the space race. By age 12, Nash had read up on what it is that chemical, mechanical and electrical engineers actually do – and this, he will remind you, was before the Internet.

Three years after the Eagle landed, Nash earned a chemical engineering degree at Missouri S&T. “That’s something we need again in this country, a national emphasis on science and technology to get young people excited about careers in math and science,” says Nash, who recently retired from his position as manager of ExxonMobil Chemical’s plant in Baytown, Texas.

“That’s something we need again in this country, a national emphasis on science and technology to get young people excited about careers in math and science.”

In addition to possessing a lot of the pragmatic qualities of the stereotypical engineer, Nash has always been something of an idealist. He believes in big dreams, whether they involve going to the moon or making the Earth a better place. That’s why he was a Peace Corps volunteer in Kenya from 1976-78. And that’s why he continues to be such a strong proponent of public education.

“I think the key need for all universities is to somehow change the mindset that higher education is not worth funding at the level needed,” Nash says. “Too many people believe that it is the individual who mostly benefits – and should pay for it – rather than society benefiting.”

Nash, who also has a master’s degree in business administration from the University of Washington, is more than willing to do his part when it comes to helping new generations of students at Missouri S&T. Back in college, he was one of the original individuals who started raising funds for the creation of a Martin Luther King, Jr. Scholarship at S&T. It took 20 years, but that scholarship endowment became a reality. Nash also established and still supports the Georgia Mae Smith Nash Endowed Scholarship – named to honor his mother – for chemical engineering students.

Nash is also devoted to giving his time to the university. He is a past president of the Miner Alumni Association, and he has served the association’s board of directors as vice president, president-elect and chair of the Annual Fund Committee. He is currently a member of the Missouri S&T Board of Trustees and the Chancellor’s Advisory Committee on African American Recruitment and Retention.

Not long ago, when S&T needed a speaker for freshman convocation but didn’t have the funds to hire someone, Nash volunteered to do it for free. The speech, predictably, was filled with good information about what the incoming freshmen could expect along with a dose of idealism. Nash quoted the Rudyard Kipling poem, If, to help make his points.

“I still remember one of the students coming up to me that morning, saying how homesick and afraid he had been, but that my talk made him feel better and now he was committed to staying,” Nash recalls. “My eyes watered up. We don’t often get moments like that in life.”