Matt Coco, CE’66, knows a lot about transformations. It’s something that he learned as a young child in his grandmother’s kitchen by watching his diminutive grandmother take four simple ingredients (flour, yeast, water and salt), knead them together and transform the dough into a delicious bread. 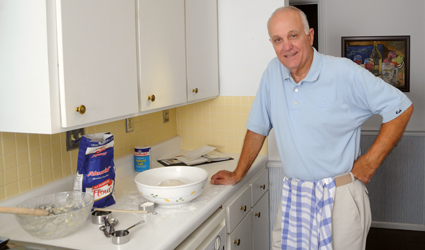 “I can always remember my mother saying that her bread was better than her mother-in-law’s because hers contained eggs,” Matt Coco says. “But I loved to eat my Grandma Coco’s bread.”

Then Matt left his neighborhood in Affton, Mo., to study at the university in Rolla. He joined Phi Kappa Theta fraternity, where he enjoyed the camaraderie of living in the fraternity house.

“I majored in classmates when I was at Rolla,” Coco says in jest. “If you were looking for me back then, you’d find me in the fraternity house. I’m very social and I just always enjoyed the campus.”

Coco’s college days also included a co-op with a state highway department, where he began his work in the construction field. His time in Rolla also saw a transformation for the university.

“When I started school it was MSM. When I graduated it was UMR. And now it’s Missouri S&T, which I love,” he says. “But Rolla has always been my second home. If I could have found work in Rolla, I would have lived there.”

Instead, he married Kathy and moved back to his old neighborhood in Affton. He went to work for McCarthy Brothers Construction for two years, then joined Alberici Constructors. He rose through the company until he retired in 2006 as vice president of the building division.

Throughout his career, Coco remained connected to the university, both through his fraternity and the alumni association. “I was always energized to see the graduating seniors when I went back to campus to recruit for our company,” he says. “They were so excited and ready to tackle the world. Compared to the other campuses, Missouri S&T graduates were a step ahead of the crowd – prepared to meet the challenges of the world.”

Coco says he gets the same charge when he visits campus, whether it’s for Homecoming or St. Pat’s weekends.

“People need to come back and catch up with their fellow alums,” he says. “Whether they made friends by sharing a lab together, living in the same boarding house or playing in band, they should come back to campus. They should see how it has grown and changed.”

Despite his retirement, Coco remains busier than ever, speaking to prospective Missouri S&T students, volunteering with Boy Scouts and in his parish, serving on the St. Louis County Building Code Review Committee, and planning his high school class’s 50th reunion.

And he hasn’t given up on duplicating and experimenting with one of his grandmother’s recipes. Although their grown sons don’t share the interest in perfecting the bread recipe, you can find the whole family in the kitchen together in the fall of the year, making 75 pounds of Italian sausage and 600 ravioli from scratch.

“It’s a family tradition,” Coco adds. “We’ve got a love of good food in our genes.”