John Eash: a focal point for S&T and Boeing

As a high school student, Chip Moll was already interested in the aerospace industry – and already planning to attend Missouri S&T – when he visited the Boeing Co. in St. Louis. He was there to “shadow” a Boeing employee for a class assignment.Turns out Moll couldn’t have shadowed a better advocate for his future college and career. 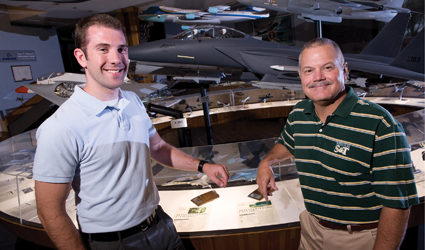 Turns out Moll couldn’t have shadowed a better advocate for his future college and career.

Moll, EMgt’06, had John Eash, AE’79, MS EMgt’90, as his tour guide of Boeing’s manufacturing facilities. At that time Eash was working in the manufacturing side and also volunteering for the Miner Alumni Association in various capacities. Now the director of supplier quality for Boeing’s Integrated Defense Systems, Eash is beginning his fourth year as Boeing’s “executive focal” for Missouri S&T. It’s a volunteer job – endorsed and supported by Boeing – that keeps him almost as busy as his executive position.

As executive focal, Eash is the main liaison between Boeing and S&T. He consults with university leaders on everything from research partnerships and employee recruitment to scholarships and continuing education. He coordinates the annual Chancellor’s Reception at Boeing, where alumni throughout the St. Louis area are invited to meet with Chancellor John F. Carney III. He hosts an annual Boeing Scholars Banquet in Rolla to recognize approximately 130 students who receive scholarships from the company. He’s working with Harvest Collier, vice provost for undergraduate studies at Missouri S&T, to create a mentoring program to help strengthen relations between Boeing and its S&T co-op students. For the past decade, he’s also helped manage an annual reception at Boeing for 30 to 40 prospective S&T students and their parents.

“Once you understand the impact volunteers have on prospective students’ lives, then giving back … is very gratifying and rewarding.”

“We have a great group of alumni here at Boeing who volunteer their time to answer questions and share their experiences.”

Eash first got involved with the alumni association board in 1995, after Alissa Gallagher Whetsel, EMgt’81, MS EMgt’83, a board member at that time and the wife of one of Eash’s Tau Kappa Epsilon fraternity brothers, James Whetsel, ChE’81, MS EMgt’83, suggested he volunteer. As a board member, he’s worked with the association’s Alumni Alliance (the board’s lobbying arm) and speaker’s bureau. He now serves as a vice president of the association and chairs the reunion committee. Eash is also active in the Order of the Golden Shillelagh major donor society, serving on the OGS Executive Committee.

Why does Eash volunteer?

“The time I spent at Rolla had a significant impact on my professional career and has left me with lifelong friendships,” he says. “I feel it’s important to provide that same opportunity to future alumni.”

But there’s another motivation. “Once you understand the impact volunteers have on prospective students’ lives, then giving back – financially or through volunteering your time – is very gratifying and rewarding.”