I need a volunteer … STAT!

Some of Missouri S&T’s most active volunteers aren’t even alumni. Yet. They are members of STAT – Students Today, Alumni Tomorrow, a student organization designed to strengthen the ties between current S&T students and alumni. 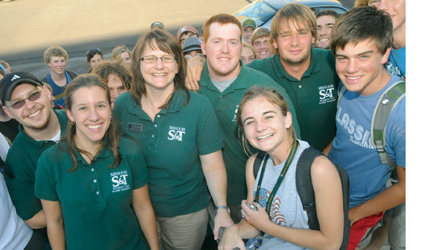 “It’s a great way to network with alumni and get your foot in the door,” says Micah Weber, a senior in computer engineering and STAT president. “It also helps us learn more about the university and why it’s important to give back.”

STAT was established in 2006 to “foster relations between alumni and students and to help connect our students with our most involved alumni,” says Marianne Ward, executive vice president of the Miner Alumni Association and the group’s advisor. STAT members get to rub elbows with alumni at Homecoming, St. Pat’s, OGS Weekend and other gatherings. At the alumni association’s annual scholarship banquet each spring, STAT students serve as table hosts for the alumni donors.

“It’s a great way to network with alumni and get your foot in the door.”

STAT members are also among the campus’s most active volunteers. The organization’s 53 students help stuff envelopes in the alumni office, set up tables and chairs for events, clean up after them, and show up whenever or wherever a crowd of students is needed on campus, such as when a government official shows up to make an announcement or tour a lab.“Anytime we need students for anything, they’re available,” Ward says.

Kimberly Earl, a senior biological sciences major and past president of the organization, enjoys every aspect of her STAT experience – whether it’s the “random errand-running” for the alumni association or helping coordinate a new event, such as the dinner STAT sponsored last spring to support a faculty talent show fundraiser for S&T’s Engineers Without Borders chapter.

“That event, to me, was the epitome of what STAT stands for: gathering our alumni and students together and letting alumni know about the good things going on with another campus organization,” Earl says.

While the opportunity to network with alumni was Weber’s main motivation for joining STAT, he’s since come to appreciate the role alumni play in supporting the campus. “I really didn’t know how much went on behind the scenes,” he says. “I didn’t know how much our alumni support the students and the university.”

With these insights, Weber, Earl and their fellow STAT members will be well-positioned to support their university as alumni.