Betty Eyberg whirls into the alumni office every day, usually mid-morning but sometimes as late as 12:30 p.m. She has mail to open and checks to stamp and it must be done quickly so the alumni staff can do their jobs. 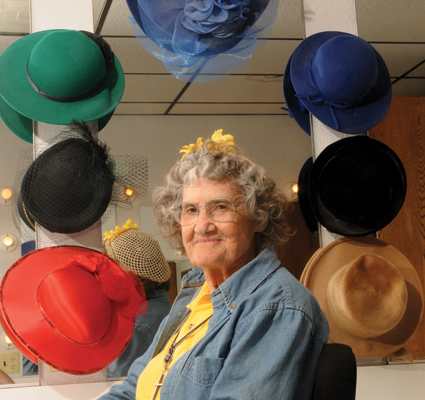 Betty Eyberg with a few samples from her hat collection. (Photo by B.A. Rupert)

This is her third stop today. She’s already done water aerobics and spent a couple of hours escorting patients around the local hospital.

But of all of her volunteer activities, this is her favorite. “When I have to give up something, this will be the last to go,” she says. “The alumni staff here is wonderful. I wouldn’t volunteer if it weren’t for them.”

The feeling is mutual from the Miner Alumni Association staff. “Betty is an inspiration,” says secretary Joni Matlock. “She has incredible energy and loves everybody.”

In addition to “wearing many hats” while volunteering in a variety of positions around town, Eyberg also never leaves her house without actually wearing one. “I wear one every day so my brain doesn’t freeze in the winter or melt in the summer.”

“I stopped by the alumni office and said I needed a job. I’ve been working ever since.”

She has volunteered throughout the campus since her husband, Walbridge Powell Eyberg, ChE’50, died in 1986. “I stopped by the alumni office and said I needed a job. I’ve been working ever since.”

Her husband grew up in the house that is now the Chi Omega sorority house on Pine Street. He was living there when he met Betty, also a student at the time, at the St. Pat’s celebration in 1948. They lived there briefly after they were married. “There are fraternities on either side,” she says. “We moved because it was so noisy!”

She was a student here for two years and continued her education as she moved with her husband and family around the country. She earned her degree in education from Wichita State University.

Eyberg helped found the Ozark Actors Theatre (OAT) in Rolla, which hosts professional theater productions, and the ACORN program (A Community Organization to Restore Nature), which has implemented walking trails throughout the town. “We came up with both names at my kitchen table,” she says.

She has also been a 45-year member of the local chapter of the National Society of the Daughters of the American Revolution, where she is also involved in conservation and community beautification.

Eyberg has had her share of difficulties in the last few years. She’s lost two of her seven children. She wasn’t expected to recover from an aortic aneurysm in 2000, and a broken ankle a few years ago slowed her down considerably.

Her health problems didn’t keep her down long, though. In fact, she still travels. She recently spent five days snorkeling and swimming with stingrays on a trip to Belize with her son and his two children. “There’s a great scuba diving school there,” she says. “I wanted to get certified with my grandchildren, but my doctor wouldn’t sign the release.”

Eyberg will tell you she’s selfish and only does what she enjoys. Maybe so, but fortunately for S&T and Rolla, what she enjoys makes this a better place to work and live.

Time’s up. She has to go now. The mail is calling.