Bay and Bauer: addressing the needs

Two of the most consistent longtime donors to campus are Robert Bay, CE’49, and Richard Bauer, ChE’51. The pair has obviously seen plenty of changes on campus. And they stay involved in order to help ensure that those changes are the good kind. 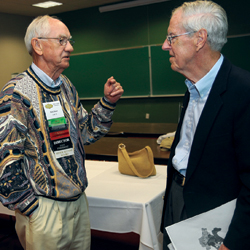 Richard Bauer (left) and Robert Bay share stories at the dedication of Centennial Hall during the 2008 Homecoming Weekend in Rolla. (Photo by B.A. Rupert)

“There were only a handful of women and minority students in 1951,” Bauer says.

Of course, math and science aren’t “just for the boys” anymore. Now, about 25 percent of the students at Missouri S&T are women. This represents one of the highest populations of female students among technological research universities in the U.S.

The percentage of African Americans and other minorities on campus has also risen dramatically, thanks in part to the Minority Engineering Program.

Lots of other things have changed, too. Take it from Bay, who remembers what life was like when he was a student. “The campus had no dormitories and no place for students to gather for leisure activities,” he says. “We lived in private rooms, attics, basements, garages or fraternities. Our meeting place was Scott’s Drug Store in downtown Rolla.”

“We must energize our alumni. They are the key to addressing the needs.”

Missouri S&T recently opened the Havener Center and the Residential College, so campus life has definitely improved. But Bauer and Bay still see room for more change. Among the university’s needs, they cite: additional athletics and recreational facilities, new scholarship funds and more support to attract and retain world-class faculty.

But where is the money going to come from? This is where Bauer and Bay, both active volunteers, past presidents of the Miner Alumni Association, and staunch supporters of S&T, really zero in on the need for alumni to be even more involved. Unfortunately, the university can’t count on state support like it could in the past. A lot of the burden has shifted to alumni.

“Little did any of us recognize years ago that state funds would diminish and every campus would be dependent upon gifts for survival,” Bay says. “We must energize our alumni. They are the key to addressing the needs.”