The ultimate dream job: For some S&T grads, space really is the final frontier 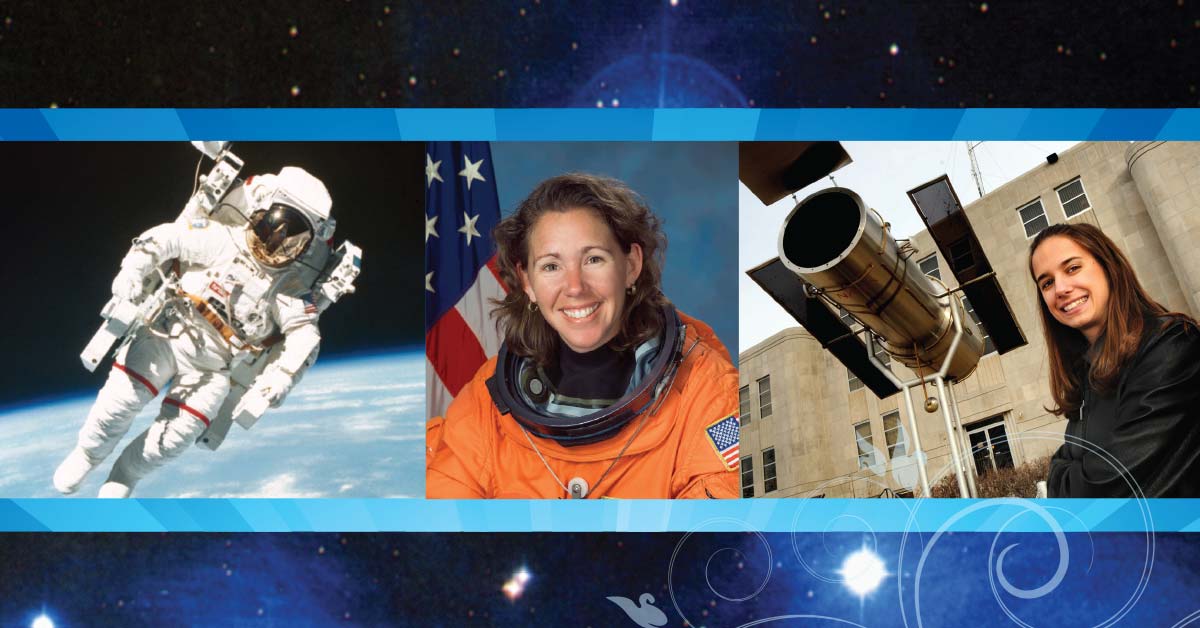 In February, Sandra Magnus became the first person to study fire aboard the International Space Station.

It was one of the many tasks for Magnus, Phys’86, MS EE’90, during her four-month stint aboard the ISS. During that time she also answered dozens of questions via a special S&T website called “spacebook.” Grade-school and middle-school students, along with others interested in space exploration, posed a variety of questions – from “Do you play games in space?” (Magnus doesn’t, but other astronauts do, and “I also have seen a few crossword puzzle books floating around”) to queries about the planets and how to cook in zero gravity.

Of the three S&T graduates who have launched careers as NASA astronauts, Magnus is the latest to launch into space. A member of the Space Shuttle Endeavour crew that flew to the International Space Station last November, Magnus stayed behind on the space station.

“Just the whole idea of exploring and learning new things just grabbed me, and space was the place to do it,” Magnus says. “It’s a fun job; I get to learn a lot of new things every day. No day is the same, and so I’m very lucky.”

Fellow S&T graduates Thomas D. Akers, AMth’73, MS AMth’75, and Janet Kavandi, MS Chem’80, have also traveled to space, but took different career paths to get there. Kavandi was one of those starry-eyed kids whose dreams of space exploration began in grade school. She was only 10 when Apollo 11 crew member Neil Armstrong took those famous steps onto the moon. “I remember thinking it would be interesting to fly to the moon and look back to Earth to see what it looked like,” she said in a 2002 interview for this magazine.

Akers, however, spent four years as a high school principal in his hometown of Eminence, Mo., then joined the Air Force. That path eventually led to NASA’s astronaut program. Akers flew on four shuttle missions, including a December 1993 expedition to repair the Hubble Space Telescope, named for astronomer and fellow Missourian Edwin P. Hubble.

While Akers was repairing the Hubble telescope, a 10-year-old girl in Hubble’s hometown of Marshfield, Mo., was thinking more about water life than space exploration. “I originally wanted to be a marine biologist,” says Michelle Rader. Movies like Apollo 13 and Armageddon captured her imagination during her junior high years, but it was Rader’s involvement with the Missouri S&T student group Miners in Space that convinced her to pursue a NASA career. Miners in Space members design experiments to put on NASA’s “weightless wonder” aircraft, which flies in a parabolic pattern to simulate microgravity (see story on page 20). Rader’s experience with that team sold her on NASA. She secured a co-op job at NASA’s Dryden Flight Research Center at Edwards Air Force Base in southern California and will begin her NASA career there after graduation this May. She hopes to one day land on the moon. “That would be the ultimate goal.”

When Akers delivered his alma mater’s December 1992 commencement address, he was six months removed from a mission to rescue a wayward satellite. In his speech, Akers was quick to point out that the mission’s success was due to the “cast of thousands” of NASA employees on the ground. The effort was “an example of the power of teamwork.”

Kurt W. Leucht is part of that NASA team. As a ground system software developer at NASA’s Kennedy Space Center in Florida, Leucht, EE’94, is one of a few hundred people writing and testing software for a future launch system at Kennedy. “It’s cool enough to work at NASA, but of all the NASA centers this is the only one they launch shuttles from,” he says.

Like Rader, Leucht got his start with NASA through the co-op program. “It was a really cool job in a failure analysis laboratory” at Kennedy, he says. “It was basically like ‘CSI.’” If something went wrong with a mechanical or electrical part at the space center, he and his co-workers investigated.

Today, Leucht works on code for running industrial controllers. It may not be as glamorous as saving satellites or living aboard the International Space Station, but “it is truly a dream job for me,” Leucht says.