Down & dirty: As far as Brandon Freeman is concerned, sewer diving is a dream job 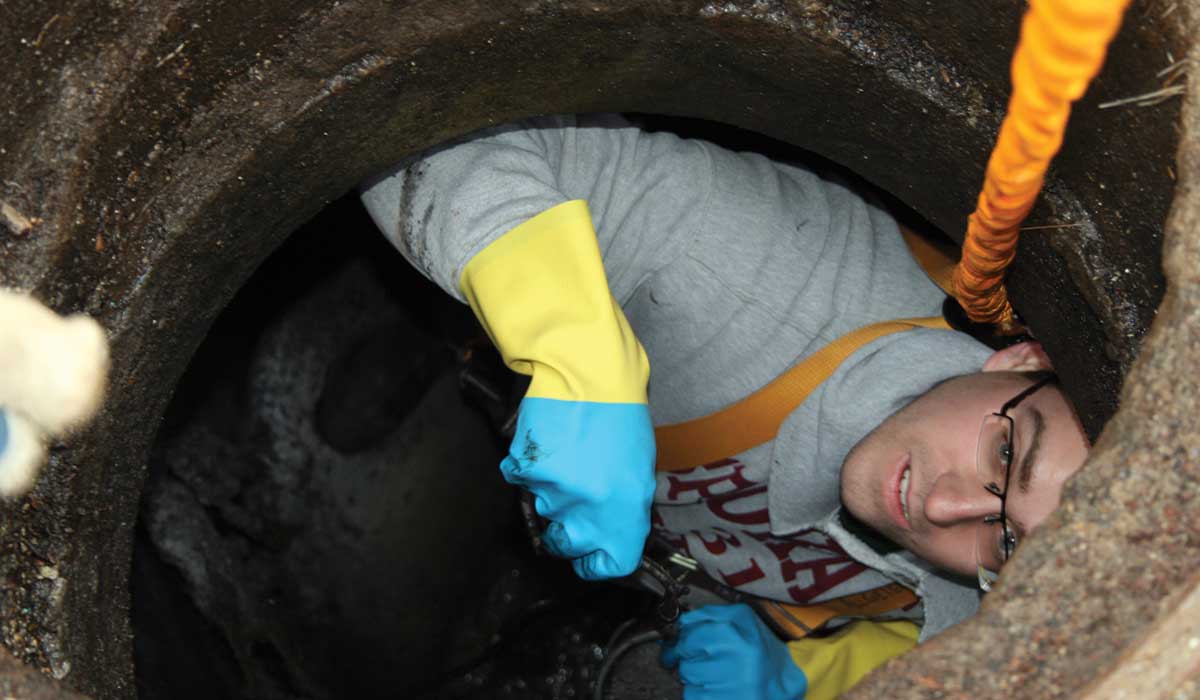 Missouri S&T has a lot of graduates who do things that might attract attention from the Discovery Channel show “Dirty Jobs.” Some of them toil under a hot sun in the oil fields. Some of them study muck from the bottom of rivers. A lot of them work in dirty underground mines. But Brandon Freeman, CE’08, might have the dirtiest occupation of all.

Several municipalities contract with his employer to have their sanitary sewer flows monitored, and Freeman, who also performs infiltration and inflow studies, is just the man for the job. “I mostly like getting out of the office,” he says, “but I would be lying by saying it’s not a little fun. I just might make a career out of it.”

Somehow, we managed to talk a photographer into agreeing to come along to witness the sights – and smells – of a sewer diver in action. We decided to meet Freeman at Allgeier, Martin and Associates, an engineering and surveying firm in Joplin, Mo.

Freeman appears to be a good- looking, All-American guy, and, upon introductions, he doesn’t come across as the crazy, reckless type who would enjoy sewer diving.

From his office, we follow Freeman and a co-worker out to a wastewater treatment plant in nearby Webb City, Mo. Prior to reaching the actual treatment facility, we stop on the shoulder of a gravel road. This is the spot. Freeman gets out of his truck and starts to arrange his gear. The manhole is situated in the weeds beside the road.

Freeman puts on tall wading boots and climbs into a harness. His co-worker has pried the manhole cover loose and is setting up a contraption that will be used to lower Freeman slowly into the sewer. Suddenly the stench of the underworld has become quite evident.

The sewer diver is now all business. His task is to read the meter below ground. In order to do this, he will have to go down there and clear the meter of debris, which can be described as “basically anything that goes down the toilet.” Normal flow through this underground system, according to Freeman, would be about 300,000 gallons. But after a big rain, it might be as high as 1.8 million gallons.

“We have high ground water in Missouri,” Freeman explains. “Sometimes it seeps into the sewer system, and that is a problem.”

“The smell never really gets better.”

Other things seep or slip into the sewer system as well. “Snakes eat the sewage and turn brown,” Freeman says, and then he disappears below surface.

He doesn’t stay down there too long.

The levels looked pretty good, according to Freeman, who now has brown stains on his shirt and something dirty in his hair. He’s ready to move on to the next hole, but those of us who are trying to get this story for the magazine, including an intrepid but slightly green photographer and a writer who’s about to lose his breakfast, assure him that we’ve pretty much seen what we needed to see. And smell.