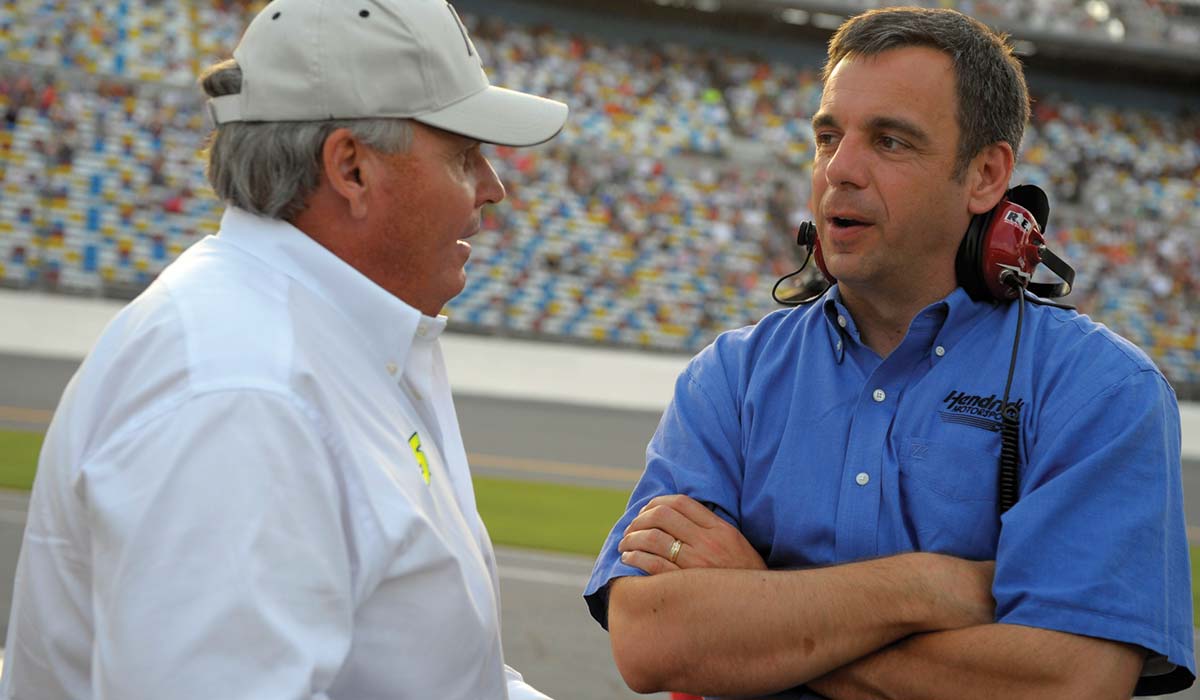 Doug Duchardt, ME’87, pictured above, right, is living life in the fast lane and there doesn’t seem to be any slowing him down.

“The fastest I’ve ever gone was at the GM Proving Grounds, and it was more than 150 mph,” he admits. “That is about as fast as I need to go.”

Duchardt, who has had a passion for racing since his youth, “didn’t have any interest in business, law or medicine,” though he did well in math and science during high school.

“The fastest I’ve ever gone was at the GM Proving Grounds, and it was more than 150 mph. That is about as fast as I need to go.”

The Morton, Ill., native began working with General Motors in 1983 after his freshman year of college at Missouri S&T.

“They had interviews for co-op jobs at various places. I got an offer from General Motors to join Buick in Flint, Mich., and that’s what I did.”

Duchardt worked his way up the ranks after graduation. In 1986, he began working with GM’s racing group as a co-op student. In 1996, he returned as the NASCAR engine manager, eventually being promoted to the executive responsible for all racing programs at GM in 2003. The program included NASCAR, IndyCar and the Corvette Le Mans program.

“That was an awesome job and I enjoyed it a lot,” Duchardt says. “It was the position I wanted at GM.”

However, he would not stay in that job long.

In 2004, a devastating plane accident near Martinsville, Va., claimed the lives of 10 people in the racing world. Those lost included members of Rick Hendrick’s family. After the accident, Hendrick, chair and CEO of Hendrick Motorsports, called Duchardt and asked if he would join his company to help him out.

“I was very honored by that,” says Duchardt. “Rick and I had worked together and had a good rapport.”

Duchardt and his family moved to Charlotte, N.C., in 2005 and he began working for Hendrick Motorsports. Currently, he is vice president of development, a position that oversees race-car evolution through design, engineering and production of the chassis, body and engine areas.

Although it may seem Duchardt has a dream job because he works with famous racecar drivers, he offers a different perspective.

“If you have passion for your job, if it’s something you love to do and there is a little bit of you on Friday afternoon that can’t wait for Monday morning, then that’s your dream job.”