Is there nickel in ‘them thar hills’? 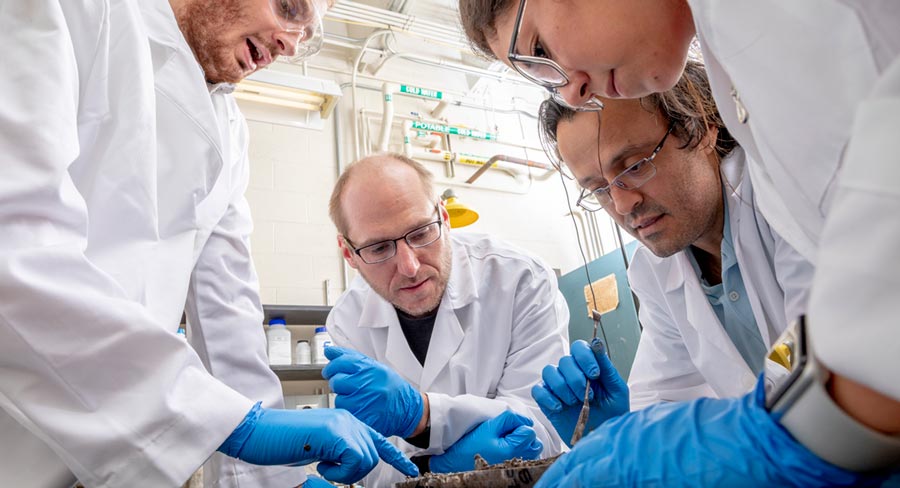 Marek Locmelis (center), Jonathan Obrist-Farner, Ryan Smith, and Gabriela Ramirez, a senior in geology and geophysics and undergraduate research assistant, analyze samples for toxic material that was left behind after major flooding in areas around St. Louis.

Major discoveries of metals with scientific and economic significance — metals like nickel, copper and platinum — are becoming few and far between, which seems to suggest that most deposits that are easy to access have already been found.

Locmelis, an assistant professor of geosciences and geological and petroleum engineering, studies where these metals come from, how they are transported and where they are most likely to be concentrated in mineable deposits.

“Most known world-class metal deposits formed relatively close to the Earth’s surface,” he says. “However, a recent decline in major discoveries suggests that most of the easily accessible, near-surface deposits have already been found. To guarantee a steady metal supply in the future, we must look at deeper levels in the Earth, which the CAREER award will help me to do.”

The CAREER award supports early career faculty who have the potential to serve as academic role models in research and education and to lead advances in the mission of their department and organization.

Locmelis is an economic geologist with expertise in geochemistry, petrology, planetary evolution and analytical chemistry.

He also studies how metals and other contaminants are redistributed during catastrophic flood events and investigates the geochemical evolution of the deep interiors of planets and protoplanets. By studying if, and how, oxygen that is bound in minerals and magmas in the interiors of planetary bodies can affect the composition of oceans and atmospheres, Locmelis can begin to predict whether or not a planet is habitable.