From Classroom to Collaboratory: An S&T history professor gives back 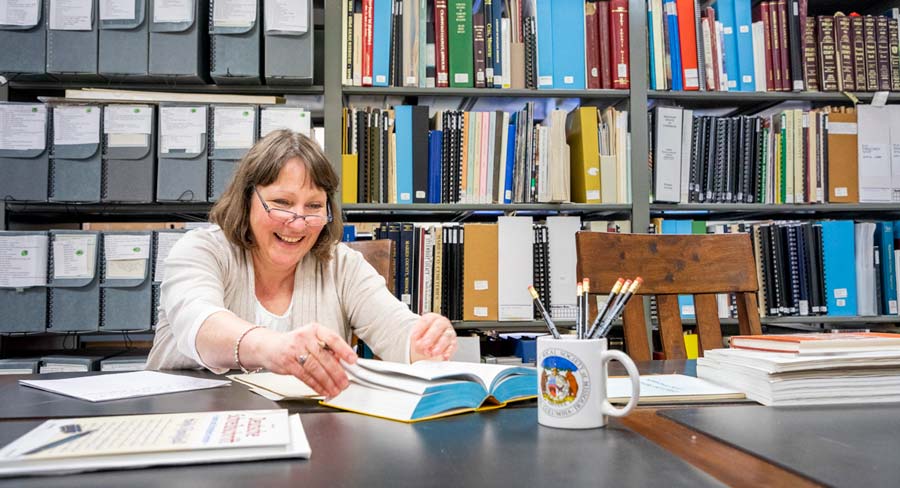 Petra DeWitt’s journey from Germany to Missouri, student to faculty member and immigrant to scholar of migration embodies the mission of the S&T Collaboratory: encouraging humanities‑based research with the potential to challenge traditional ways of thinking.

DeWitt, Hist’96, an S&T associate professor of history, immigrated to the United States from Germany in 1985 with her husband, an American soldier. She became a Missouri resident and soon discovered the state’s German-American culture, a legacy reaching back to the early 1800s with the influx of German immigrants who established communities along the Missouri River valley and in the St. Louis area.

DeWitt eventually turned her experience into scholarship as a specialist in immigration and ethnic history. Her book, Degrees of Allegiance: Harassment and Loyalty in Missouri’s German-American Community during World War I, won the 2012 Missouri Book Award.

Now DeWitt is giving back to future generations of scholars through an endowment in support of the S&T Collaboratory, a new digital humanities lab in the College of Arts, Sciences, and Business. Her endowment established the DeWitt Collaboratory Undergraduate Student Assistantship.

“My goal in creating the endowment was to fund a permanent position dedicated to encouraging humanities students to exchange ideas, solve problems and create innovative projects,” says DeWitt, who joined the S&T faculty in 2003 after earning a Ph.D. in history from the University of Missouri-Columbia and a master’s degree in history from Truman State University. “The Collaboratory assistantship will encourage the growth of significant, original research in the humanities.”

DeWitt writes and speaks frequently about social issues and ethnicity during World War I. She spoke at the National World War I Museum and Memorial in Kansas City on the 100th anniversary of the war’s end. Her S&T courses include the Making of Modern Germany, European Migration and Nationalism Formation, and Historiography.

“Dr. DeWitt’s historiography class really stood out to me,” says James Trusler, Hist’16, who teaches social studies at Rolla Junior High School. “Her dedication inspired me to become the best history teacher I can be.”