Travis Gittemeier: the man inside the mascot 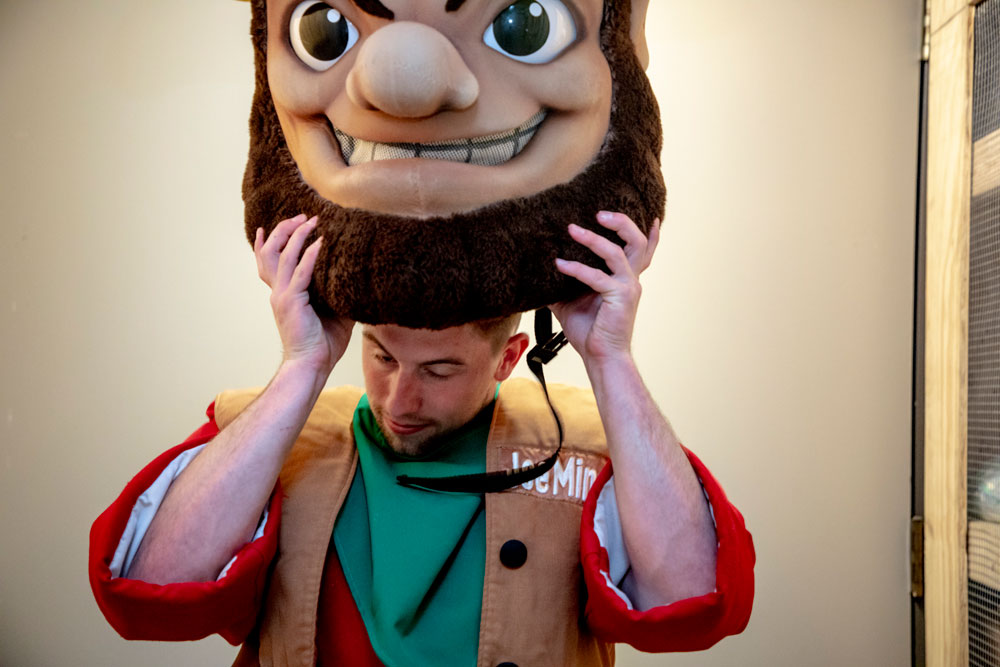 He isn’t the most talkative person you’ll ever meet. But when you spend many of your college days and nights suited up as a mute mascot, chattiness isn’t required.

A quiet demeanor and good time management skills have paid dividends for Travis Gittemeier, ME’19, during his three years at Missouri S&T, where he spent a lot of time inside the Joe Miner mascot costume.

“I read a book about mascots, and it said that some of the best people who take on mascot roles are introverts,” says Gittemeier, a native of Moberly, Mo. And based on his real-life experiences at two schools, Gittemeier can confirm that the book’s title — Yes, It’s Hot in Here, by ESPN’s A.J. Mass — is accurate.

Upon arriving on campus in 2016, Gittemeier and mechanical engineering academic advisor Erica Long, CE’03, former coach of the Miners cheerleading squad, approached athletic director Mark Mullin about handing over the Joe Miner uniform to Gittemeier. A transfer from his hometown Moberly Area Community College in northern Missouri, Gittemeier came with prior experience on his side, having served as MACC’s two-legged greyhound mascot, Majic, during the previous two years.

Suiting up as Joe Miner helped boost Gittemeier’s confidence. “It’s made me more outgoing,” he says. But it wasn’t always that way. “Even though I’m in a suit, at first it was a challenge to go out in front of people and act crazy.”

But he managed, and he enjoyed himself in the process — high-fiving fans and leading cheers at sporting events, posing for selfies at student recruitment and alumni events on campus, and showing up for various university and community occasions. In February, he joined his fellow University of Missouri System campus mascots at the systemwide Legislative Showcase in the State Capitol, where Joe Miner hobnobbed with state lawmakers and their aides.

Along with a greater sense of confidence, Gittemeier’s mascot experience helped him better manage his time. “That can be pretty difficult,” he says. “There was always something to do, and it was always a lot of fun, but school has to come first.”

When he wasn’t studying or mascoting, Gittemeier kept active in his fraternity, Sigma Chi, and participated in the Trap and Skeet, Climbing, and Paintball clubs. After graduation in May, Gittemeier joined Midwest Mechanical Contractors in Kansas City, Mo., as a project engineer. Even as an alumnus, he doesn’t rule out returning to the sidelines as Joe Miner if an opportunity presents itself. Of course, no one will know if it’s really him inside the costume.