The battle for the brain 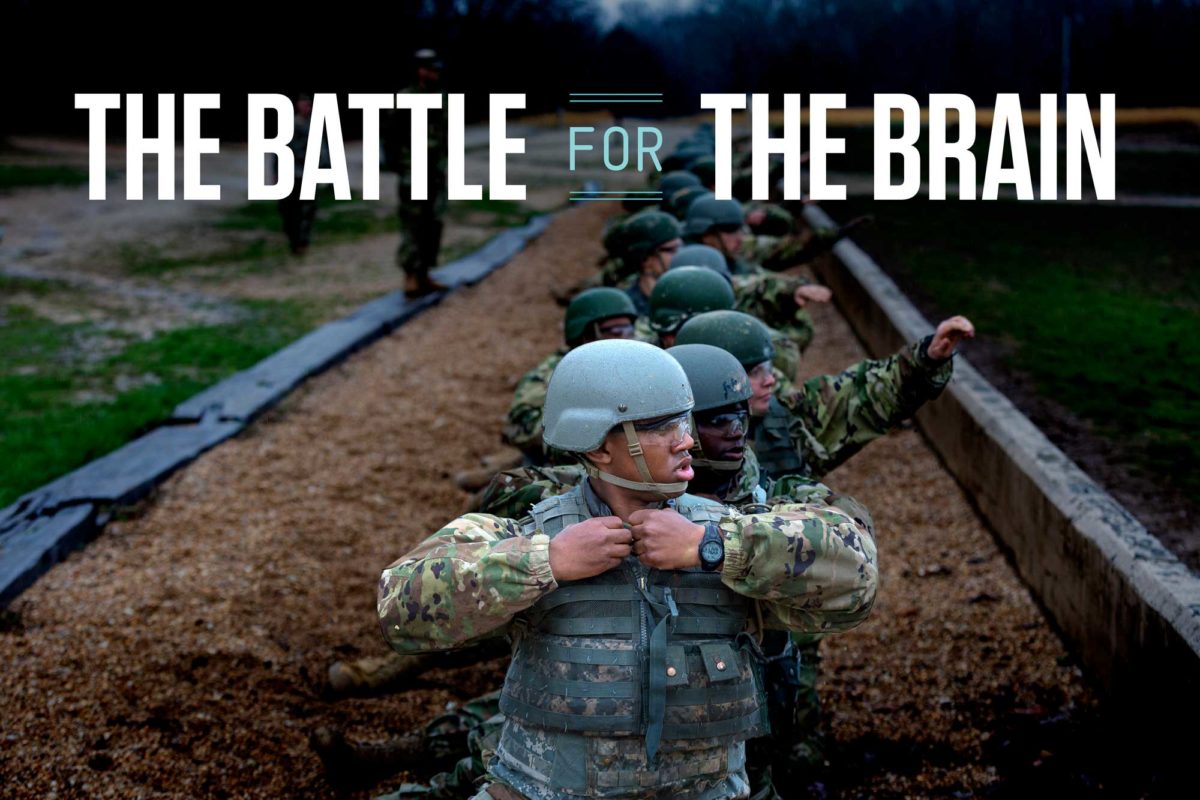 Soldiers in combat encounter life-threatening perils at every turn. But even if they survive a dangerous situation like a roadside bomb detonation, that experience could result in long-term, life-threatening damage. And the cause may never be known.

Hundreds of thousands of U.S. soldiers suffer from traumatic brain injury (TBI), according to a 2018 report from the Center for a New American Security, a Washington, D.C., think tank. Left undiagnosed or untreated, TBI can result in later complications, including dementia, according to a 2018 study published in the American Medical Association’s journal JAMA Neurology.

But soldiers don’t experience brain trauma only on the battlefield. The Army estimates that 85% of all TBIs occur during training, says Barry S. White, executive director of the Acute Effects of Neurotrauma Consortium (AENC). Army recruits at Fort Leonard Wood, about 30 miles southwest of Rolla, endure high levels of blast overpressure — the pressure waves that come from explosions — while firing heavy weapons, White says.

“One poor sergeant said he could barely drive home at night” after a full day of leading hand-grenade training at Fort Leonard Wood, White says. “He was practically begging for us to do something.”

Now, thanks in large part to Missouri S&T researchers, the consortium is taking action.

The facts on traumatic brain injury:

Despite recent advances in brain science — from brain-mapping techniques to a greater understanding of Alzheimer’s — little progress has been made to understand or treat TBI. “The field test to determine if a soldier may have a brain injury consists of, ‘How many fingers am I holding up?’ and asking, ‘Who’s the president?’” says White.

“Diagnosis is still in the Model T era, and so is treatment,” says Dr. Donald L. James, chair of the AENC board of directors and senior vice president of research and government affairs at Phelps Health, a regional health system based in Rolla.

Missouri S&T, Phelps Health, Fort Leonard Wood, the Leonard Wood Institute (LWI, the Army base’s research arm) and three other universities recently joined together to advance TBI diagnosis and treatment. Phelps Health and LWI formed the AENC as a mechanism to support TBI research. They worked with U.S. Sen. Roy Blunt, who helped secure $10 million in federal funding for the effort. Missouri S&T joined the consortium in 2018. The University of Missouri campuses in Columbia and Kansas City, along with Washington University in St. Louis, are also AENC members.

The consortium is focused on prevention, detection or treatment of “acute” (short-term) TBI only. For the military, the earlier TBI can be detected, the better — not only for the sake of soldiers’ health, but also for economic reasons. It costs the Army about $77,000 to train a single soldier, White says, adding that the Army estimates 600 to 800 recruits at Fort Leonard Wood experience TBI each year, even though only 200 to 250 are reported.

The partnership between S&T and Phelps Health made sense, James says. Both organizations are based in Rolla, and both entered into an agreement in 2015 to more closely work together on relevant research. One outcome of that agreement is the Ozark Biomedical Initiative, which provides seed money from both entities to support collaborative projects. The S&T-Phelps Health connection has also led to what White calls “serendipitous moments.”

One of those resulted from a practical research need a few years ago.

Casey Burton, Chem’13, PhD Chem’17, and his advisor Yinfa Ma, Curators’ Distinguished Teaching Professor emeritus of chemistry, were devising a system to detect the presence of breast cancer through urine testing. They found that urine containing a certain biomarker — what Burton calls a “molecular fingerprint” — indicated the presence of breast cancer more accurately and safely than a mammogram. The process is also less costly, and results are available in minutes.

But Ma and Burton needed urine samples for their research. Ma contacted James, who was intrigued by the project. He told Ma about a University of Utah study of student-athletes with concussions in which blood samples drawn from the students found two biomarkers that indicated concussions. James encouraged Burton and Ma to expand their project to see if similar biomarkers might also indicate brain trauma.

Ma has since retired from S&T, but the work continues under Burton. Now director of medical research at Phelps Health and an adjunct professor of chemistry at S&T, he is one of seven S&T-affiliated researchers to obtain LWI funding to conduct further research into TBI (see story on page 28).

In all, the S&T researchers have received more than $5.1 million in federal funding for their TBI research, and more is expected.

Beyond military applications, the research could lead to improvements on how TBI is detected and treated among civilians. Because TBI is linked to long-term problems like dementia, Alzheimer’s disease and post-traumatic stress disorder, early diagnosis or treatments could prevent future chronic problems.

“If we can mitigate brain cell death, that will be the first big step,” James says. “Then we can look at other applications.”