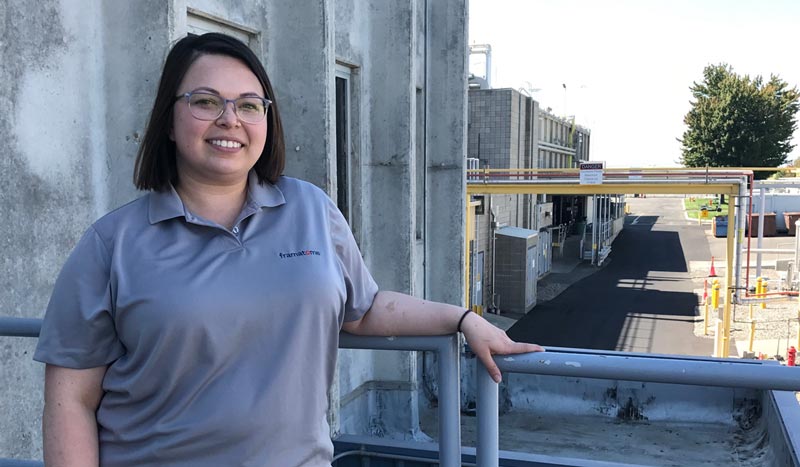 When Destinee Rea, CerE’15, began looking at colleges, she knew she wanted to pursue a career in the STEM field. The problem? She had no idea which one.

After considering chemical engineering and later chemistry, Rea landed on ceramic engineering. She knew she wanted to work in manufacturing after an internship in the glaze preparation department at porcelain floor tile manufacturer Dal-Tile.

“In manufacturing, the process of whatever you are manufacturing is essentially the same every day, but there is always a new challenge,” she says.

Rea says her professors always stressed that the most important thing students could learn while they were at S&T was how to solve problems.

“This has been so true throughout these first few years of my career,” she says.

“I certainly never expected to be working in the nuclear industry with my ceramic engineering degree, but uranium dioxide nuclear fuel pellets are ceramic material,” she says.

The fuel produced at Framatome accounts for around 5% of the total electricity generated in the United States, according to Rea.

“To me, the most rewarding part of working in manufacturing is that what I do every day contributes to something tangible,” she says. “I can just go out on the manufacturing floor and see the fuel pellets that we are making and know that we are contributing to carbon-free electricity.”

Rea has also been in the manufacturing side of Framatome’s contribution to the Department of Energy’s Enhanced Accident Tolerant Fuel program. The company has been developing chromia-enhanced uranium dioxide (UO2) fuel for the program.

Rea encourages S&T students to remember that their path won’t always be linear.

“It’s easy to have certain expectations coming in to college as a freshman, but who really has life figured out at 18? Or 19? Or 20?” she says. “Finding a support system in the ceramic engineering department was key, really. My professors cared about whether I succeeded or not, and there was always a group of students that I could study with in the McNutt commons area.”