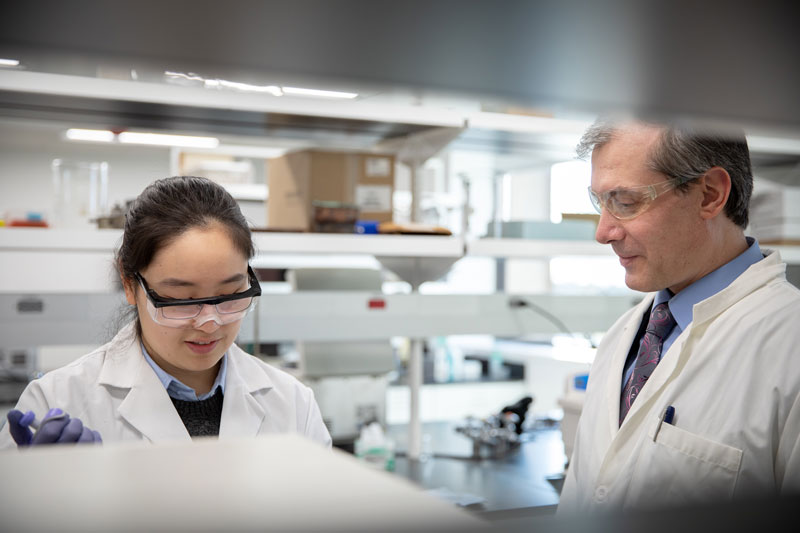 Vadym Mochalin, associate professor of chemistry, and Shuohan Huang, a doctoral student in chemistry, have discovered MXenes can react with water without the presence of other oxidizers.

In spite of their diminutive size, 2-D titanium carbide materials known as MXenes are “quite reactive” to water, a discovery S&T researchers say could have implications for energy storage and harvesting applications such as batteries, supercapacitors and beyond. Their findings were published in 2018 in the American Chemical Society journal Inorganic Chemistry.

“The reactivity of MXenes toward water we’ve demonstrated not only changes the common perception about resistance of titanium carbide to hydrolysis in ambient conditions, but also points out the striking differences in chemical properties between bulk and 2-D forms of the same material,” says Vadym Mochalin, associate professor of chemistry at Missouri S&T and the principal investigator of this project.

One of the largest families of 2-D materials, MXenes are a few-atom-thick sheets with the structures of transition-metal carbides and nitrides. Their distinctive properties include high electrical conductivity and the ability to disperse in water, a unique combination that earned them a nickname “conductive clays.”

“Our new findings are important because now we know it is water itself rather than oxygen that MXenes need to be protected from during manufacturing and storage,” says Shuohan Huang, a doctoral student in chemistry at Missouri S&T and the paper’s lead author.

To arrive at their “water-only” conclusion, Huang and Mochalin systematically tested the hydrolysis and chemical stability of MXenes Ti3C2Tx and Ti2CTx in water and non-aqueous colloidal solutions exposed to different combinations of oxygen and inert gas environments, as well as both oxygen and inert gas.

“It seems that in their 2-D state, transition-metal carbides are quite reactive,” says Mochalin. “With our result, we’re looking forward to follow-up studies of their rich chemistry in reactions with water and other molecules, including organic compounds, as well as studies into MXenes’ possible catalytic properties.”