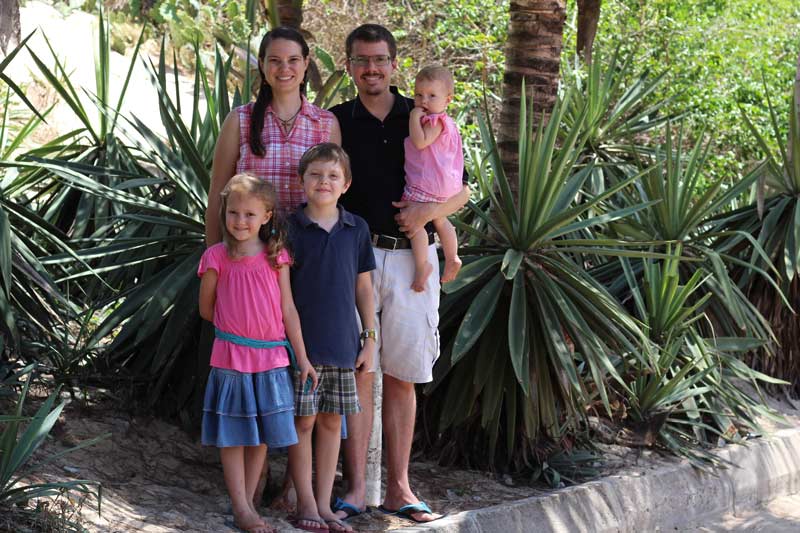 Missionaries Jon and Carla Reinagel are pictured here with their children, Jariel, 6, Kyran, 8, and Alizah, 1. Photos courtesy of the Reinagels.

Jon, Phys’07, and Carla, Engl’07, Reinagel first traveled to the African nation of Mozambique as missionaries with Iris Ministries in 2008. They spent three years in Dondo, a community of 15,000.

After returning to the states for a few years, they are now back in Africa where they founded Equip Mozambique in 2014. The foundation supports leadership development, introduces technology and develops strategies to alleviate poverty.

They have begun several projects, including the “Fountain of Life” app, a free Christian resource that equips African churches with audio and text Bibles in multiple languages and dialects, recorded sermons and dozens of Christian books.

In 2016, the Reinagels helped found Restoring Hope sewing school to give widows and single mothers the skills to help them rise out of poverty.

“The sewing school teaches how to sew, then sells the products to pay for sewing machines for the attendees,” says Jon. “When they graduate, they have a machine that they have earned with their own work.”

In 2017, the Reinagels opened a Christian library, Biblioteca Beireano, and they are now developing a medical app that Jon describes as “Web MD for Mozambique with simple language and many pictures to help those who are not literate.”

Learn more about the couple’s work at equipmoz.org.