A faster charge for electric vehicles 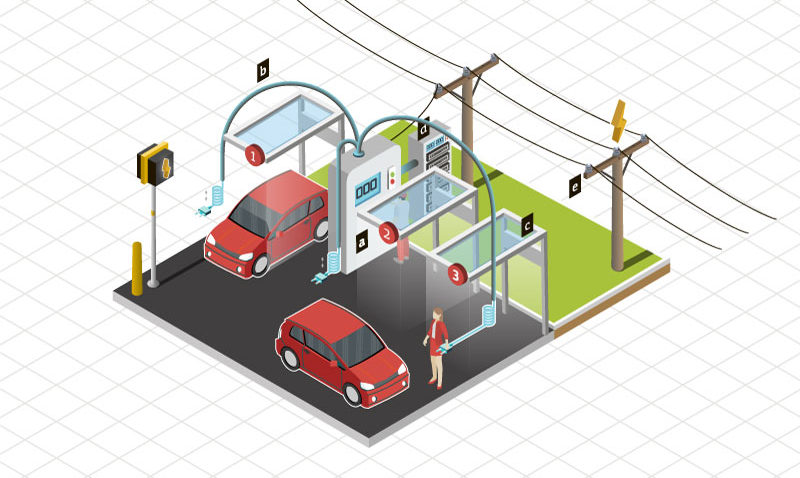 One drawback of electric vehicles (EVs) is the time it takes to charge them. But what if you could plug in your EV and fully charge it as quickly as it takes to fill up a conventional car with gasoline? Missouri S&T researchers, in collaboration with three private companies, are working to make speedy charging a reality.

“The big problem with electric vehicles is range, and it’s not so much range as range anxiety. People are nervous about not being able to get where they’re going,” says Jonathan Kimball, Missouri S&T professor of electrical and computer engineering. “With a conventional vehicle, you pull up, get gas, and in 10 minutes you’re back on the road.” Kimball is leading a team that received a $2.9 million matching grant from the U.S. Department of Energy to develop an extreme fast-charging system for electric cars over the next three years.

Kimball says the group hopes to make electric cars more user-friendly by significantly reducing charging time. Most electric car chargers on the market today require anywhere from a few hours to overnight to fully charge a vehicle. Even Tesla’s Supercharger stations take up to an hour to fully charge a car.

Kimball says there will be challenges to building these fast charging stations. The first challenge is whether the batteries can withstand such speedy charges. Overcharging a lithium battery could lead to overheating and fire, he says, and even if that scenario is avoided, the battery could still be damaged and wear out faster.

Jonghyun Park, a Missouri S&T assistant professor of mechanical engineering, joined the team to help minimize the degradation to the lithium ion batteries.

“At extreme fast charging rates, lithium-ion batteries can be damaged severely due to the limited energy transfer properties of the battery materials,” he says. “This not only degrades battery performance, but also causes a short circuit that can lead to a safety issue.”

To address these challenges, the team will develop a model-based protocol for monitoring what researchers call the battery’s “state of charge” and “state of health.”

Joining this part of the project is LG Chem Michigan, which supplies lithium-ion batteries, from cells to packs, for both stationary and vehicle applications, and Bitrode, which develops and markets battery formation and laboratory test equipment.

Quickly pulling large amounts of electricity from the power grid is another challenge for researchers, says Kimball. He estimates that charging a lithium ion car battery in 10 minutes will take about 300 to 400 kilowatts, and adding several cars charging simultaneously could add up to more than one megawatt in needed power. In the Midwest, one megawatt hour of energy can power hundreds of homes for an hour.

Rui Bo, S&T assistant professor of electrical and computer engineering, says the sudden high current needed for fast charging would affect the power quality from the utility provider. That means it could affect other customers that also need power.

Bo and Kimball hope to bypass that instant pull on the electric grid by first connecting to a charged battery and then ramping up to connect directly to the 12-kilovolt distribution network.