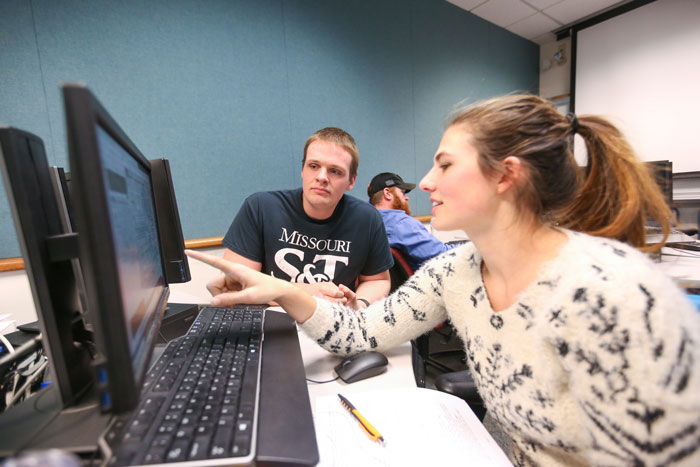 Avery Welker, a doctoral student in engineering at Missouri S&T, is the student representative on the University of Missouri Board of Curators.

It isn’t difficult to spot Avery Welker in a crowd. And the 6-foot-4-inch-tall S&T graduate student’s broad smile and relaxed manner make it easy for him to make connections.

“I find it fun to talk and learn something new about a person,” says Welker, PetE’16, MS PetE’18, pictured above with Anna Ramirez, a senior in petroleum engineering and secretary of Students Today, Alumni Tomorrow.

During his days as an undergraduate student and resident advisor, Welker focused on helping his fellow S&T students succeed. Now, as student representative to the UM Board of Curators, Welker is in a position to help even more students find success.

“The role I would like to fill is being a solid point that any student, at any campus, can come to and ask for help,” he says. “Having been at Missouri S&T for a long time, I would know what direction to point a student in regardless of what campus they are on.”

The most enjoyable part of the role for Welker so far has been learning about the support he has within the UM System leadership.

“Meeting a lot of new people and finding out just how much the system leadership truly cares about me and wants to help me succeed was incredibly encouraging,” says Welker. “It has been really humbling to have so many important people that drive the university, take time out of their days to help me, give me advice and teach me about their departments.”

Welker says he initially chose Missouri S&T because it offered a quality education in his discipline at an affordable price.

“Being eligible for in-state tuition and [Missouri S&T] having the program I wanted was a huge reason I decided on pursuing my bachelor’s degree here,” says Welker. “Once I was on campus, it grew into so much more than a good investment. The quality of education that I’ve been given in my program is one of the best parts of S&T.”

“The role I would like to fill is being a solid point that any student, at any campus, can come to and ask for help.”