Deshawn Jones: On top of his game 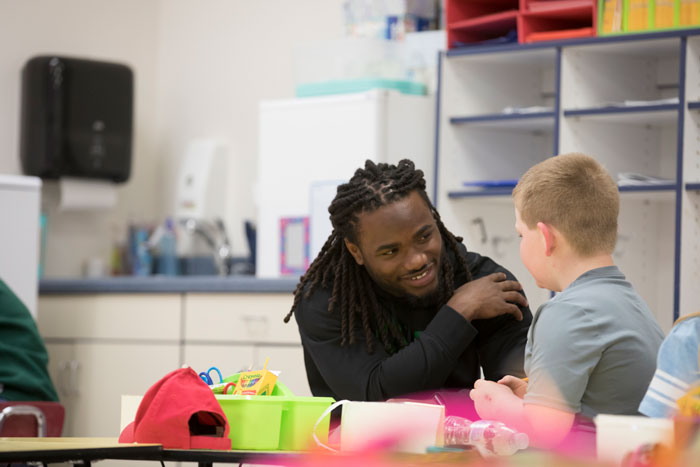 With intelligence, discipline and athletic prowess, Deshawn Jones, a junior in biological sciences and running back for Missouri S&T’s football team, has amassed a coveted collection of athletic titles and records at S&T. But he has been raking in awards since grammar school.

Jones grew up in inner-city Chicago, the middle child of three. He began to cultivate his work ethic as a kindergartner. Today, despite his demanding schedule, he willingly gives one afternoon a week during the school year to help children at a Rolla elementary school develop skills in studying, decision-making, teamwork and leadership.

“I know what it’s like to need help with school work,” Jones says. “I relied on my mother to help me at night after she worked long day shifts. I decided early on to take stress off her and learn to help myself, and this early development served me well in the long run.”

When Jones was a teenager, his family moved to Country Club Hills, where he graduated third in his class and was voted the football team’s most valuable player, Male Student Athlete of the Year and an Illinois State Scholar.

“I selected S&T because I liked the diversity there and the opportunity for cultural development,” Jones says. “It presented an opportunity for me to connect with, learn and respect different cultures, which will enhance my career as a medical professional.”

Jones hopes to one day be a trauma surgeon. But before that, he wants to play professional football and save his salary to pay for medical school.

“I interact with Deshawn in my role as S&T faculty athletics representative,” says David Westenberg, associate professor of biological sciences at Missouri S&T. “What impresses me most is what he is doing in the community by tutoring local students. I can’t wait to see what the future holds for him.”