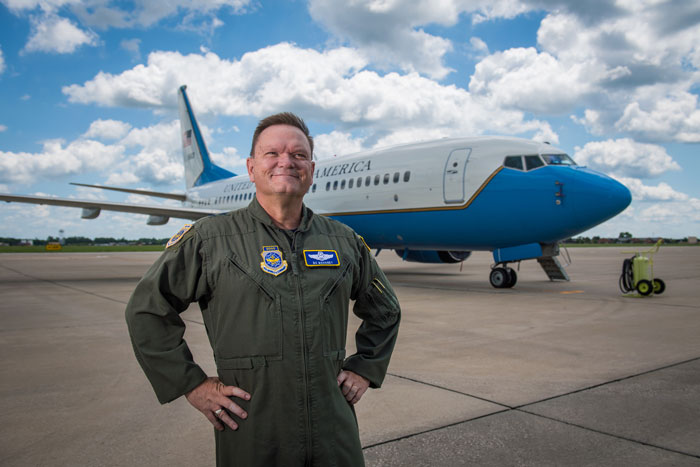 “I truly have a love of country and take nothing for granted,” Mahaney says. “Our freedom isn’t free. We can’t take democracy for granted. That foundational belief is why I do business the way I do. The foundation keeps me there — I know what my purpose is.”

From his beginnings as a pilot, Mahaney had the opportunity to lead in groups that systematically grew larger: from squadron, to wing, to major commands.

“I didn’t think about getting promoted,” says Mahaney. “I do the best job I can in the job I’m in. The goal is not to achieve rank, but to take care of everyone and make sure they have the best opportunity to succeed.”

Mahaney says he was born to build relationships with people, and this natural characteristic has been key to his success. He has faith in people to do the right thing, and says he believes in idea sharing, a practice he incorporates when he trains future commanders.

“I come to work every day looking to put forth the best ideas,” says Mahaney. “But the reality is, when people have better ideas than you, let them share them — move past your own and do what benefits everyone else.

“When push comes to shove, not everyone is willing to do that,” says Mahaney. “As a leader, I’m willing to accept the ideas of the troops I command and allow them to be leaders.”

Mahaney leads with four tenets: take care of people, and they will take care of the mission; create a culture of respect; expect excellence; encourage feedback.

And after all this is done, Mahaney says he’s just happy to still be flying.