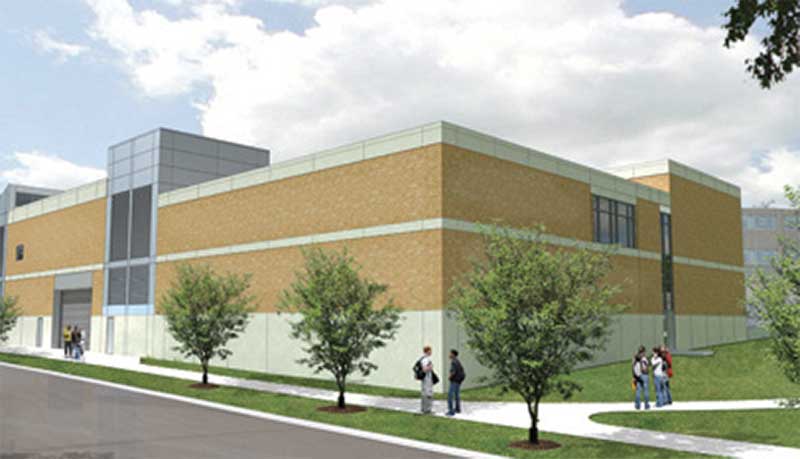 Thanks to an investment from the University of Missouri System, major gifts from industry partners and alumni support, S&T will break ground on the Advanced Construction and Materials Laboratory (ACML) on Oct. 12, during Homecoming weekend.

The lab will provide space for research on construction products and processes designed to be stronger, more secure and sustainable.

In June 2017, UM System President Mun Y. Choi committed $1.6 million to the project, identifying it as a strategic investment for the system.

This past February, ARCO Construction Co., its founders and many of the 25 S&T graduates employed there made a $300,000 contribution.

“ARCO stepped up because Missouri S&T — and the S&T alumni who work at ARCO — have been a large part of our success,” says Dick Arnoldy, CE’69, MS EMgt’73, retired chairman of the general contracting company, which he co-founded in 1992 with Jeff Cook, EMgt’94, president and chief executive officer.

“Research on next-generation construction materials and methods will have a significant impact on how we design and build in the future,” says Steve Sieckhaus. “Investing in this research is a strategic move that will benefit the entire industry.”

A U.S. Department of Transportation grant for $2.5 million in testing equipment, obtained by Kamal Khayat, the Vernon and Maralee Jones Professor of Civil Engineering, completed the first phase of the initiative. The second phase added faculty positions. The $6.5 million ACML will add 16,000 square feet to the high-bay structures lab in Butler-Carlton Hall.

The Sunderland Foundation, the charitable arm of Ash Grove Cement Co., was also a major donor. Additional support from S&T’s College of Engineering and Computing and private gifts including a bequest from James A. Heidman, CE’65, MS CE’66, were instrumental to funding the lab.

For Tom Sieckhaus, the partnership is a long-term investment in a better future. “The impact of this research will affect the daily lives of millions for generations to come,” he says.